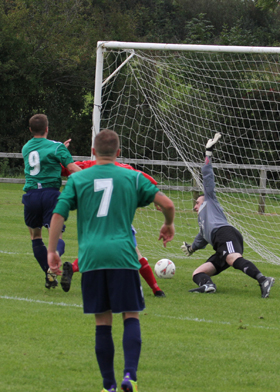 A persistent Stephen Galbraith squeezes the ball past the Islandmagee keeper.[/caption]

An impressive second half performance from Downpatrick saw them progress to the fourth round of the Border Cup at the expense of Premier League outfit Islandmagee at Rosconner on Saturday. However this result was overshadowed by the terrible news which greeted both sets of players after the game, the tragic death of Stuart Ross who died suddenly while representing Islandmagee’s second’s team.

This keenly contested cup tie started quite nervy for the home side who were guilty of making some mistakes which on another day could have seen them on the wrong side of a result. A mix up between keeper Conan Russell and defender Barry Fitzsimons in the opening minutes almost allowed Islandmagee to open the scoring.

Downpatrick’s first chance came from Matthew McGarrity, who won the ball in midfield and drove at the Islandmagee’s defence, with no defenders rushing out to close him down. McGarrity unleashed a shot from 25 yards which forced the keeper into conceding a corner. Downpatrick were continuing to give up possession of the ball and their net was leading a charmed life with the Islandmagee winger and centre forward being guilty of wasting goal scoring opportunities.

On the twenty minute mark Downpatrick had their first real opportunity after excellent play between Conor McKenna and Andrew Telford, allowed Telford to play in striker Stephen Galbraith down the right hand side but his cross was just too high for strike partner John Glennon.

The next five minutes of the game saw the Premier league side take a strong foothold in the game and race into a two goal lead. Their first goal came from a quick break down their right hand side, the ball was crossed into Downpatrick’s box and the ball was partially cleared to the edge of the box but fell lovely for the oncoming Islandmagee player who hit an unstoppable effort high into the roof of the net giving Russell no chance. 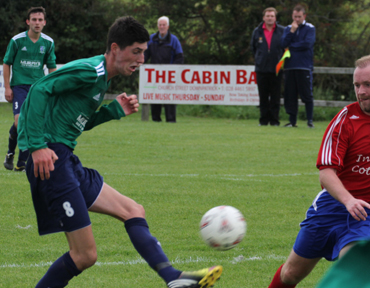 Still reeling from conceding the opening goal Downpatrick were guilty of not switching on at the re-start and allowed the Islandmagee striker to win the ball around 40 yards from goal and go on a mazy run skipping past three challenges before finding himself one on one with the Downpatrick keeper. The striker steadied himself and sent Conan Russell the wrong way and fired the ball into the net.

Downpatrick steadied themselves after this and for the next ten minutes began to get back into the game and were rewarded just after the half hour mark. Andrew Telford broke down the right flank and managed to cross the ball between two defenders, the ball took a slight deflection and fell kindly for Galbraith who composed himself and slotted the ball past the away team’s custodian.

The final five minutes of the half saw keeper Russell show exactly why he is regarded as one of the brightest young prospects in the local area with some breathtaking saves after fine efforts from three different Islandmagee players. However his last save of the three resulted in an Islandmagee corner which was crossed in and saw the Islandmagee striker rise highest and head in their third goal.

At half-time  the scoreline was Downpatrick 1 – Islandmagee 3.

Whatever the Downpatrick management gave the players at half-time should be bottled and kept for future games as they came out in the second half and produced a fine performance.

In the opening three minutes of the second half they were back on level terms, Downpatricks second goal saw Stephen Galbraith providing the killer pass to Andrew Telford with a delightful ball over the Islandmagee defence allowing Telford to give the keeper no chance and slotting the ball into the net.

Downpatrick’s equaliser came from a corner after McGarrity’s effort was deflected out over the by-line. Andrew Telford drilled the ball into the box which was met superbly on the volley by left back Blaine Connolly to drill into the net to send the home support crazy with delight. A shell shocked Islandmagee team were now being overrun by the rampant Downpatrick trio of Galbraith, Telford and Glennon.

Downpatrick could and probably should have been in front a lot sooner than when they managed their fourth goal with the Islandmagee keeper making some outstanding saves from Galbraith and John Glennon, Andrew Telford also saw a shot rebound of the post and another shot cleared of the line. Terence Bell also got in on the act when his 20 yards shots sailed inches wide of the post.

On the half hour mark Islandmagee gave Downpatrick a timely reminder they could still cause problems especially on the break. Downpatrick forced a corner which came to nothing but within ten seconds keeper Russell was forced to make another excellent save. Substitute Chrissy Mullan was introduced and almost had an immediate impact on the game when he broke down the left flank and cut in to hit a right footed shot which bounced of the post to safety.

With ten minutes remaining Downpatrick scored what proved to be the winning goal. Blaine Connolly surged out of defence and played the most wonderful ball over the Islandmagee defence with the outside of his left foot into the path of Galbraith who controlled the ball perfectly before drilling a shot across the keeper into the net.

The final minutes saw Islandmagee pile on the pressure but the Downpatrick defence of Fitzsimons, Connolly, Mark Curran and Ciaran McGarrity stood up to everything which came there way to hold out for an outstanding win. Downpatrick had star performances throughout the team especially in the second half but special mention goes to Conan Russell and Andrew Telford.