<![CDATA[ <p style="text-align: justify;">DOWNPATRICK clergy gathered together  (Thursday 28 November) to mark the move of the 1100 year old Downpatrick High Cross into a protected environment in Down County Museum.

The Curator of Down County Museum, Mike King, with South Down MP Margaret Ritchie and Down District Council Chairman Cllr Marie McCarthy look over the High Cross which is to be moved to the museum nearby.[/caption]

The Cross will be conserved and put on display in a new extension being funded by the Early Christian Heritage strand of the European Union’s INTERREG IVA scheme for developing cross-border tourism. A replica is to be set up to replace the original Cross, which has suffered considerable deterioration through time, including damage by the weather.

Centre-stage in the project are Down District Council Chairman Cllr Maria McCarthy and Margaret Ritchie, MP for South Down, both key supporters of the development of Down District Council’s important Christian Heritage assets. Councillor McCarthy said: “This is an exciting project which Down District Council is pleased to be launching in partnership with the Church of Ireland, East Border Region and the NIEA, and we are looking forward to preserving the Town Cross for all members of the community and attracting tourists from all over the world to see this ancient and iconic monument of local Christianity and culture.”

The Dean of Down, the Rev Henry Hull, commented: “The Town Cross was gifted to the Dean and Chapter at the end of the nineteenth century and has stood in front of the Cathedral since that time. We have been very conscious of the effect of weathering in eroding the features on the cross and we are very grateful to the European Union, NIEA, Down Council and Down County Museum in enabling us to preserve this special monument for further generations.” 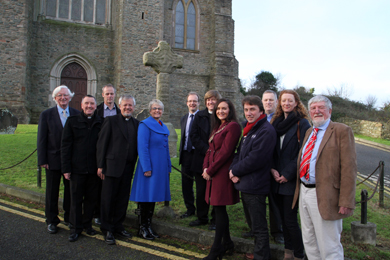 A momentous occasion. The Downpatrick High Cross is to be moved to a location in Down County Museum in order to preserve it.[/caption]

Speaking on behalf of East Border Region Ltd, Chairman, Cllr Gerald Mallon said: “We are delighted to be in a position to part fund this project through the Tourism Development Plan, one of the key tourism attractions in our Region is the strong Christian Heritage product and this project will certainly enhance the offering for visitors to our Region.”

Environment Minister Mark H Durkan also added: “The  relocation  of the High Cross, a Scheduled Historic Monument, to the Museum, will help to preserve this heritage asset in the town of Downpatrick for future generations to come. NIEA worked closely with the Museum and granted Scheduled Monument Consent for the project to ensure the conservation and continued protection of this unique early Christian carving. NIEA is funding  the dismantling and removal of the cross to the museum, along with its conservation, and the creation of a replica to be erected in its place outside Downpatrick Cathedral.”

A similar project was carried out some years ago at the important monastic site of Clonmacnoise, but this is the first major project to move a High Cross inside, as close as possible to its original site, in Northern Ireland. 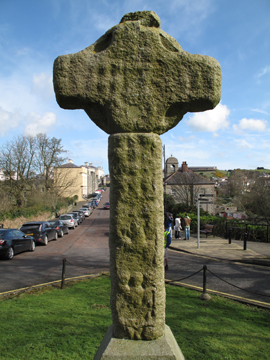 The High Cross looking down The Mall in Downpatrick.[/caption]

The Mourne granite Cross will be carefully dismantled by conservators this week, and a small excavation will take place on the site of the Cross on Saturday 7 December. The Cross was set up on this site in 1897 by Francis Joseph Bigger, and it will be necessary to re-lay the foundations to ensure that the replica can be safely installed. The replica is being made by S McConnell and Sons of Kilkeel and will be put in place early in 2014.

New photographs and scans of the Cross are revealing details of the carvings which have not been seen before, leading to new interpretations of the biblical scenes from the Old and New Testaments depicted on its front and rear faces.

Originally carved in about AD 900 as a ‘prayer in stone’, and put up in an unknown location at the early medieval monastery on the Hill of Down, the High Cross was taken down after the Reformation and used as the town’s Market Cross, located outside the present Down Arts Centre, where the town’s former Market House stood from 1660. This became a very busy place, and the Cross may have suffered some damage here, before being dismantled and its parts dispersed around the town. Only in the 1890s were the parts gathered together by Francis Joseph Bigger and reconstructed outside the east end of Down Cathedral, with the help of subscriptions from generous donors.

The current project to move the Cross also has generous partners involved. The Church of Ireland has agreed to a long-term loan of the Cross to Down District Council in order to protect it from the weather and to interpret it to visitors within a purpose-built extension at the rear of Down County Museum, which will also have fine views of other early medieval sites in the landscape, including Down Cathedral, Inch Abbey and the Mound of Down. The Northern Ireland Environment Agency has given consent for the Cross to be moved to the Museum and is funding its removal and conservation, and the replication of the Cross. 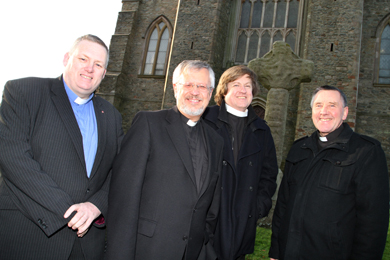 The Rev Ken Connor, Rev David Steers, Rev Henry Hull, and Canon Sean Rogan outside Downpatrick Cathedral beside the Cross erected there around 100 years ago by famous antiquarian, Joseph Biggar.[/caption]

The key funding (almost £500,000) for the Museum’s new extension and exhibitions has been facilitated by the East Border Region and is part-financed by the European Union’s INTERREG IVA Cross Border Programme managed by the Special EU Programmes Body. Down District Council is also providing funds towards the project with the aim of continuing the development of the Early Christian and St Patrick-related tourism product that Downpatrick has to offer, and supporting the economic regeneration of the town through its unique heritage.

The removal of the Cross for conservation is the first stage in the 16 month project to protect and display this unique piece of Irish art. In 2014 the Cross will be cleaned, drawn and photographed, while the extension is being constructed and exhibitions and a new tearoom are being planned and developed. The next key steps will be:

*  By  December, the stone will be selected for the replica Cross from the quarry on Thomas Mountain.

*  5 December: The original Cross will be carefully dismantled and moved to Down County Museum

*  7 December: A small archaeological excavation dig will be carried out on the site of the Cross by archaeologists and members of Downpatrick Young Archaeologists’ Club

Down County Museum will be reporting developments with the project regularly and intends to invite the public to meet the conservators who are going to clean up the Cross early in 2014. Dates will be supplied nearer the time.