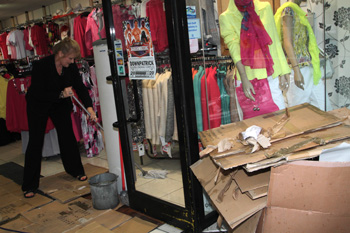 Staff in Vogue fashion shop mop up after the flood abated.[/caption]

Lower Market Street was under water just before the main morning rush of people driving off to work. There have been repeated floods in this section of the town over recent years and again this incident which happened quickly has caused considerable damage to local business premises. £3.1 million has been earmarked to upgrade the sewage system in Downpatrick and this incident will now focus the attention of NI Water and other  agencies involved in its speedy implementation.

Publican Bartley Murphy who was quick on the scene said: “I received a phone call from a bus driver early this morning at 6.45am saying the flooding was getting bad. I went down to Market Street and immediately phoned all of the relevant emergency services. The only ones that responded right away were the Northern Ireland Fire Service who helped on the scene as water entered the businesses. I put a couple of cars across the road to stop them driving through the flood as the wash was breaking into my bar.

“Once NI Water eventually arrived they identified that it was likely a trip switch in a pumping station that had gone off and once it was put back on the water disappeared in a few minutes. It seems there was no back up for this. The electricity must have gone on to cause the trip to go. 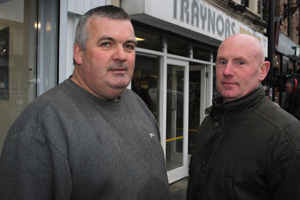 “There is a lot of damage done to my bar. The wooden floor will need to be rep;aced, the damp is down behind the seating, two fridges are destroyed, and on a further inspection there may be more. The DRD tasked a loss adjuster to estimate what the damages are.

“There was sewage mixed in with the rainwater and this has spread through all of the businesses as far as I can see. It could be a health hazard. I did speak to the Minister this morning after talking on the Nolan show and he expressed his concern about the incident and said there was a fund set aside to help.”

Ritchie Says Flooding Could Have Been Avoided

South Down MP Margaret Ritchie has responded to reports of flooding in Market Street and Ballydugan Road, Downpatrick early this morning which has impacted on some businesses.

Ms Ritchie said: “I understand due to the failure of two pumps early on Wednesday morning, combined with heavy rain, some businesses and properties on Market Street were damaged by flood and sewage water. This could have been avoided if NI Water had put in place a proper back up system which would work during periods of interruption to the electricity supply. 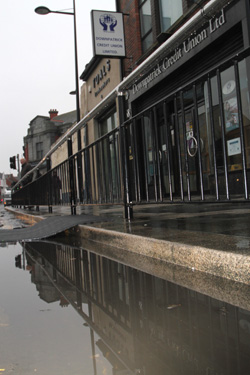 The flood waters rise early in the morning in Market Street in Downpatrick.[/caption]

“Further to representations to Northern Ireland Water, I have been advised that engineers were onsite from early morning to alleviate the flood damage and repair the pumps. It is imperative that Northern Ireland Water take all preventative steps to ensure this matter is resolved as a matter of urgency and furthermore, does not happen again in the future.

“Minister for Regional Development and NI Water must now provide clarification as to why this happened; what measures will be put in place to ensure it will not happen again; what back- up systems they have in place to prevent such incidents in the future, and what compensation will be offered businesses who have lost produce.

“The business community need assurances that their properties will safe from further incidents of flooding. I have organised an onsite meeting with senior officials from Northern Ireland Water on Monday morning where I will be asking what steps will be taken to ensure businesses in this commerce area of Downpatrick will not be affected in the future by events of this nature. In these times of economic austerity it is crucial that all Government bodies work efficiently to assist businesses in all ways possible. I will also be raising this matter with the Minister for Regional Development directly.”

As business owners brushed out their premises and assessed the damage, this flooding incident has to be seen as a one off problem due to a technical failure, but as Bartley Murphy said: “Why was there not a back up system?”

Northern Ireland Water responded to Down News and a spokesperson explained the background to the incident. “NI Water can confirm there was an incident of flooding in the Market Street area of Downpatrick.  Initial indications are that the pumps in the pumping station tripped. Although they were reset within a short period of time flooding did result. 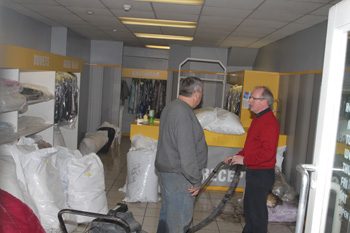 Noel Traynor, right, once again mops up after his dry cleaning business is flooded.[/caption]

“NI Water will fully investigate the cause of this incident but in the meantime staff are on site to lend assistance to affected customers and loss adjusters from the company are also visiting those affected to assess the damage caused.  NI Water regrets that damage has been sustained to several properties and sympathises with those customers affected.

“NI Water will do all we can to mitigate the distress and inconvenience caused. NI Water would point out that funding has been made available for a £3.1 million scheme to upgrade the sewerage network and significantly reduce the risk of flooding in the area.  A contractor has been  appointed and  on completion of land  issues,  we would hope to progress  to  site as soon as possible. This involves the relocation of the existing wastewater pumping station (WwPS) to a new site some 300m from its current location.

“A contract involving laying a trunk sewer pipeline was carried out in advance of the Environmental Improvement Scheme in Market St. Work and completed in July 2010 at a cost of £900k. NI Water has already invested £15 million in schemes for Church Street pumping station as well as an upgrade of the Wastewater Treatment Works, Belfast Road, Downpatrick.  There are also further proposed upgrades in the Russell Park area at a cost of approximately £2 million.”