<![CDATA[ <p style="text-align: justify;">A Downpatrick family has been forced out of their new home after a callous arson attack which could have resulted in the loss of life.

Jade McCaul moved into her state-of-the-art home at Ardilea Close in Downpatrick over a year ago into the award-winning social housing estate owned by Clanmill Housing. Last Thursday  morning in the early hours her car parked in the driveway outside her home was set alight and destroyed. 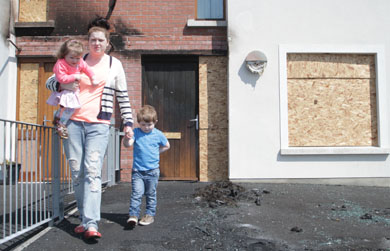 Arson attack leaves family homeless. Jade McCaul from Downpatrick now homeless after an arson attack on her car sitting outside her front door in Ardilea Close.[/caption]

Jade said: “I had gone to bed and woke feeling something was wrong. There was an orange glow and I could hear a banging noise which continued. When I looked out the front window from upstairs I could see my car was a ball of flames.

“Immediately I grabbed my two young children Aoife and Riley and went out through the back door and had to climb over the fence to a neighbour’s garden. Neighbours looked after  my children and a crowd gathered but the fire was quite intense and could not be put out.

“I phoned the fire brigade and others too had phoned. They were there within fifteen minutes which was excellent and put out the fire.

“The fireman said that a brick was in the back seat which meant someone had smashed the window and poured in some petrol and lit it. The person who did this also tried to break the lower front window but fortunately it did not break completely. The windows have triplex glazing and are quite strong. Had the window broke, flames may have entered the house and this could have ended up as a real tragedy. I only had the car for thirteen days when this happened. 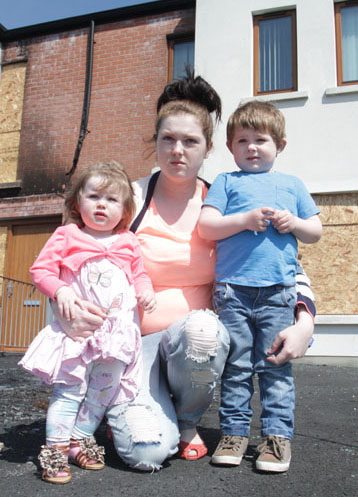 Contemplating the future. Jade McCaul with her two children Aoife and Riley  outside her fire-damaged home in Downpatrick.[/caption]

“A brick was also found lying below the front window which means that someone had also attacked it. I just don’t know who could have done this. I am a single mother with two young children mind my own business. The front windows are now all boarded up now and will need replaced because of fire damage. The front door too is badly scorched along with the exterior front wall and drain pipes, and  also the neighbours front wall has suffered fire and smoke damage.

“Last November someone broke into my home and entered  through the narrow front window panel. They must have been quite small and certainly likely someone of school age. I had just decorated my home and was well settled in to it. I’ve now had to move into my mother’s home temporarily until I get this sorted out with Clanmill Housing. It is all very worrying. I really don’t want to move. I really like my new home. “

A police spokesperson said: “Police in Downpatrick are investigating the arson attack on a beige coloured Renault Scenic car in Ardilea Close during the early hours of Thursday 2 May.

“Shortly before 2.45am, a rear window of the vehicle was smashed and flammable material thrown inside.  The car was completely gutted.  A front window of the house was also smashed.

“The following day police received a report that a neighbouring property had also been damaged by the vehicle fire.”

The police are currently looking into the incident and anyone who witnessed it or who has any information is asked to contact police at Downpatrick on 0845 600 8000.  Information can also be passed anonymously to the independent charity Crimestoppers on 0800 555 111.

The award-winning Clanmill Housing scheme was opening in 2011 and its homes have many environmentally sustainable features such as solar panels and rainwater recycled through the toilet system.

But for Jade and her family, there will be a wait now until this situation is assessed by the Clanmill Housing Association and repair work carried out.