<![CDATA[ <p style="text-align: justify;">A series of recommendations to rationalise the court estate in Northern Ireland have been outlined to the Justice Committee and Downpatrick court house is definitely NOT on the hit list.

A Department of Justice spokesperson said: “On 29 January 2015 the Northern Ireland Courts and Tribunals Service (NICTS) published a consultation paper on proposals to rationalise the court estate.

“The consultation document set out the challenges facing NICTS in the context of diminishing resources which meant that continuing to operate the current 20 courthouses is no longer sustainable. In addition to the financial challenges, business volumes have been falling and many of the Court buildings are under-utilised. It was therefore necessary to reflect on the number of courthouses required.

“The Justice Committee has been briefed on the outcome of the consultation process and on a series of recommendations currently under consideration by the Justice Minister, David Ford.” 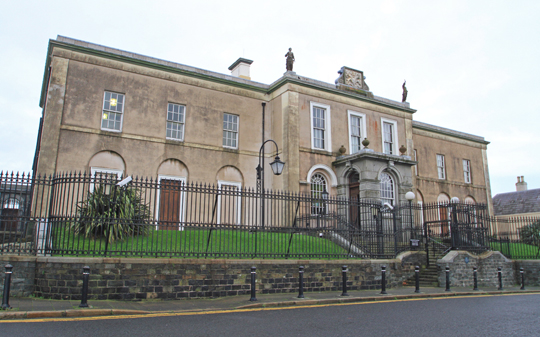 Downpatrick Courthouse – definitely not on the closure list.[/caption]

In summary, in relation to courthouses in the south and eastern region affected, it is recommended that:

*  the Old Townhall Building in Belfast should remain closed at this time and the potential to develop it as a Family Justice Centre should be considered as an option in the context of the Department of Justice Estate Strategy;

*  Lisburn should close and the business transfer to Laganside Courts.

*  Newtownards should be retained at this time and as a result the Administrative Court Divisions have been reconfigured. The future retention of Newtownards will be tied to the outcome of ongoing consideration of the potential use of the Old Townhall Building;

*  Armagh should close and all business transferred to Newry.

The spokesperson addded “At this stage no final decisions have been made. The Minister will take time to reflect on the views of the Justice Committee and will make an announcement in the new year.”

Newry and Mourne District Councillor Billy Walker said: “I’m delighted that the historic Downpatrick Courthouse is not involved in these cut proposals. It is an important part of Downpatrick and provides a number of jobs locally and supports lcoal businesses such as restaurants, so it is reassuring that there will be no job losses in Downpatrick,  The courthouse has been here a long time and always seems busy, so there is no reason why it should be considered for closure and I think it will enjoy a secure future for a long time to come.”