AT the end of last school term when everyone was looking forward to the summer holidays, there was a very worrying meningitis scare at Our Lady and St Patrick School in Downpatrick. Fortunately it was well managed by the school and the Department of Education and health authorities.

But one event, slipped through the next… the presentation of the Down News Olympic Torch photograph competition for the best Olympic torch photo sent in supporting the great day when the torch was carried through Down District.

The Bunscoil Mhuire agus Padraid classes 6 and 7 were the winners by making a great joined up effort and they received a £100 cheque from the Olympic organisers.

School principal Hugh Kelly said: “I am just delighted that our pupils have won this competition. They had great fun putting their giant poster together. It was a team effort. An the photograph shows this up.”

Class teacher Aingeal Nic an tSábhaisigh explained to the children in Irish they had won the competition and there were smiles all round. 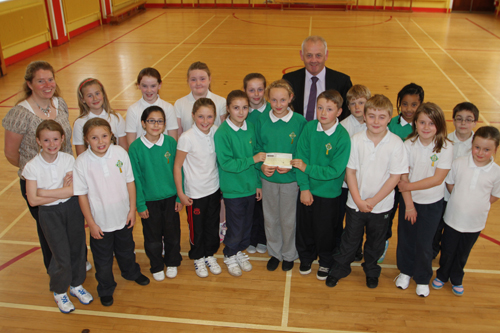 Ulster Wildlife Seeks To Engage With Students In Down