<![CDATA[ <p style="text-align: justify;">STAFF from the Dementia Assessment Unit in the Downe Hospital have received a ‘Dementia Design Innovation of the Year’ award which was presented by Health Minister Edwin Poots MLA at this year’s Dementia Achievements Awards organised by the DSDC NI (Dementia Services Development Centre NI) held in Belfast.

The awards brought together carers, health workers and volunteers to celebrate and share the good working practice in dementia care within Northern Ireland. 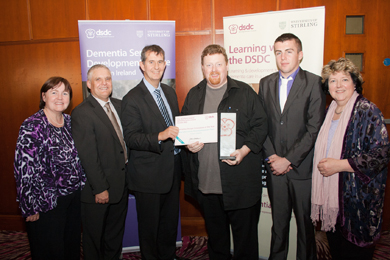 Barry Lynch and the Downe dementia Assessment team are presented with an award from Health MInister Poots.[/caption]

The staff in the Dementia Assessment Unit received the award for their work regarding the re-design and development of the Dementia Assessment Unit. During the time when the work was being carried out on the ward, the staff showed their commitment and dedication by continuing to deliver and maintain safe and excellent standards of care. Barry Lynch, Deputy Ward Manager, was also nominated for his design in supporting patients and maintaining their independence in the unit.

Nicki Patterson, Director of Nursing, Older People and  Primary Care, South Eastern HSC Trust said: “I am delighted to see the work of the team in the Downe Dementia Assessment Unit being recognised through this award. Their vision and hard work in the re-design and development of the unit has resulted in patients being cared for in a safe, high quality, person centred environment. Well done to all involved!”

Roisin Keown, Deputy Ward Manager at Lagan Valley Hospital was runner up for her work improving Ward 11’s design for easily disorientated patients with dementia. This was achieved through methods such as use of colour coordination and signposting as well as the installation of acoustic flooring to help reduce fracture. Her leadership and ability to liaise with staff and families during this time was highly commended.

Upon presenting the awards, Health Minister Edwin Poots said: “The work done by individuals, and by organisations such as the Dementia Services Development Centre, has helped drive dementia into the consciousness of the public, the media, and those in government. We will continue to strive for further improvements and to tackle the future issues that go hand in hand with living with dementia.”

The Northern Ireland Dementia Services Development Centre which organised the awards was supported by a prestigious team of judges from with health and social care sector in Northern Ireland.  A wide range of entries were carefully considered to decide on the finalists and winners and the judges were impressed by the high standard.

Professor June Andrews, Director of DSDC added: “This is a great way to celebrate what is best in dementia care in Northern Ireland.  People are putting knowledge into practice and really making a difference for individuals, families and communities.”