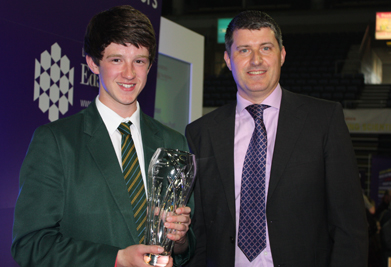 John’s project, Fone2 Find, was awarded top prize from over 400 other entries in the age range 11-19. He is one of the youngest to win this particular accolade. The judges felt that his electronic  device was innovative, had great commercial potential. He  not only presented his device but also considered how it could be developed and sold, quoting profit margins and economies of scale in his presentation.

He received a Dublin Crystal trophy presented by Dr Michael McGrath, Senior Technologist with the Intel Corporation. Intel is a global company with over 60,000 employees around the world. John also received a Gold Crest Award. Crest is a UK Award scheme, recognising success, building skills and demonstrating personal attainment in STEM project work. It is an outstanding achievement to receive a gold award in this age group.

In April/May of next year John will now travel to Los Angeles where he will be the only representative for Northern Ireland in the World Finals of the Intel/ISEF Engineering and Science Fair. This is an amazing prize and a fantastic opportunity to display his ideas to judges from all over the world.

Sentinus Young Innovators is one of the largest regional STEM (Science, Technology, Engineering and Maths) events in the United Kingdom. In recent years it has grown to involve over 3000 young people from colleges and schools, aged 11-19, from all over Ireland. It provides a showcase for students to demonstrate creativity, innovation and enthusiasm.

It is the largest regional STEM (Science, Technology, Engineering and Maths) event in the UK. Projects are judged by more than 130 STEM Ambassadors from local companies, further and higher education institutions and from public sector organisations. The importance of STEM is paramount in creating a workforce that is capable of helping to drive our economy forward in these difficult economic times. More than 50,000 pupils are engaged annually in STEM programmes.