<![CDATA[ <p style="text-align: justify;">STEVE Lally, a County Down author of an exciting new book launched at Down County Museum, made a number of readings from his work to an excited audience.

The readings, set in the precints of a museum already steeped in fascinating and at times gory history, were from a collection of tales and accounts of historical incidents around CountyDown. 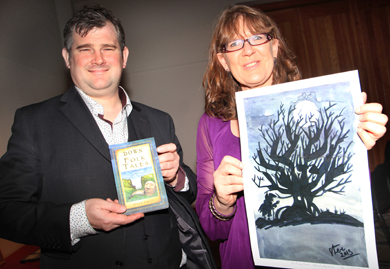 Author Steve Lally with Down County Museum Education Officer Linda McKenna pictured at the launch of ‘Down Folk Tales’.[/caption]

Steve, from Banbridge with connections across the County, said: “This collection is from all corners of County Down and includes some thrilling accounts of highwayman Redmond O’Hanlon, who was actually beheaded at this very gaol and his head as gruesomely put up on a spike outside the front entrance.

“There are a number of great ghost stories too which are very timely as Halloween approaches. And there are too stories of St Patrick and St Donard  touching on the local legends.

“These stories are really a wealth of information, tales and legends collected from local people and are beautifully illustrated to help bring magic and myth of the whole book to life.

“It is a good read for children of all ages from nine to ninety.

Following the readings, Steve Lally signed a few copies of his book. The illustrations in the book were also for sale as large prints.

Steve added: “County Down has the largest amount of fairy trees in the North and  local people are so very protective of them. For example, at Ballyward near Castlewellan, a fence was put round one to protect it from any harm.  Superstitions are still rife in rural areas.

“I covered too the story of Maggie of Maggie’s Leap just south of Newcastle, and also the Gillhall ghosts. There is something in the book for everyone.”

Copies are on sale at Down County Museum.