<![CDATA[ <p style="text-align: justify;">Down District Council has won a Golden Carton Award for its work to increase drinks carton recycling in the district.

The awards, which are designed to celebrate environmental leadership and recycling best-practice, recognise local authorities achieving the greatest improvements in beverage carton recycling. 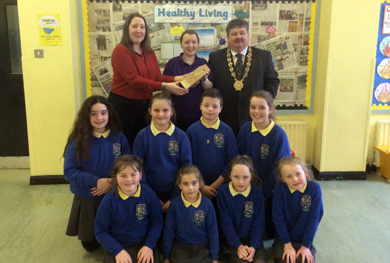 The council entered and won the category for ‘Best Communications Campaign’ recognising its wide ranging communications activities, from a mobile education bus engaging directly with residents to themed recycling events, giveaways and incentives for local residents. They also ran an excellent schools’ educational programme and proactively engaged on social media and with local media outlets to promote the recycling message.

Commenting on the entry the Judges said: “The campaign showed great creativity in finding ways to reach the widest possible audience and this is reflected in fantastic engagement with the local residents and a tenfold increase in beverage carton recycling in Down over the last year. This is a great achievement at a time when local authority budgets are being squeezed from all sides.”

Down District Council Chairman, Cllr William Walker said: “We put a lot of thought and effort into our communications programme and our residents have responded very positively. It’s great to see it pay off in our recycling rates and to be recognised nationally for our efforts.

“We have made some really great progress on recycling but with tough targets to meet, it is important that we continue to actively engage with our residents.

“Increasing the amount of waste we recycle from this area, reduces disposal costs and harmful greenhouse gas emissions, making our service more environmentally-friendly and providing better value for money for local residents.”

Fay Dashper, Senior Recycling Manager at ACE UK said: “We were delighted to receive such a high standard of entries to the awards. It demonstrates the excellent work that local authorities are doing to promote recycling.

“We are committed to increasing carton recycling in the UK and following the opening of our dedicated UK beverage carton recycling plant in 2013, it has been fantastic to be able to recycle Down District Council’s cartons via Bryson Recycling and arc21.”

The Alliance for Beverage Cartons and the Environment (ACE) UK provides a platform for the industry to profile and benchmark cartons as a renewable, recyclable and low-carbon packaging choice, and to drive its environmental initiatives. This includes running the industry’s carton recycling programme.

ACE UK represents Elopak, SIG Combibloc and Tetra Pak, the leading manufacturers of beverage cartons for the UK market. It is also supported by Korsnäs and Stora Enso, which produce about 98% of the paperboard used by ACE UK members in beverage cartons in Europe.