The Council wants to harness new technology to reach further into the community, engage directly with the public and push out key messages to ratepayers. 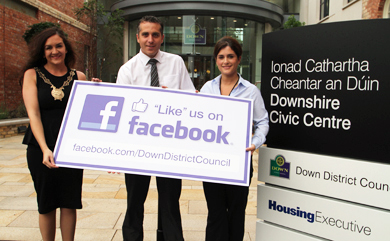 Speaking at the launch of the competition, Down District Council Chairman, Councillor Maria McCarthy said: “Down district has almost 30,000 homes with an average of 79% of the citizens of Down having access to the internet. As well as using social media as another channel for promoting the work of the Council and engaging with our ratepayers, we also want to use a reliable, instant way of getting vital service alerts to residents.”

Councillor Maria McCarthy explained how the Council has been using social media to date. “We have used our Facebook and Twitter platforms to provide vital Council information to residents during times of bad winter weather or emergencies.

“This would include instant, real-time information on things like weather warnings, flood alerts and delays to bin collections. This type of information is particularly important in Down district where residents are often spread out over large, rural areas.

“We are also confident that sites such as Facebook and Twitter would enable the Council to start genuine two way conversations with residents, in ways that were not previously possible.  Over the past year Down District Council has rapidly been building a strong online community but we want to grow that further and hope that this competition will draw attention to the fact that Down District Council is very much online.

“We’re really entering a new depth of community engagement with the extension into social networking. What makes it easier to connect to our page is the free Wi-Fi provision in Ballynahinch, Downpatrick and Newcastle town centres.”

“Essentially Down District Council’s corporate Facebook and Twitter pages are places where people can talk to Council, whilst also taking ownership of the district, its projects and its future planning. It’s an online shop-front for us to promote our projects and call for feedback.  In a time when we aim to continue to grow our region in the best way possible, there can never be enough information available. With all the vibrancy of the district updated through images of events and the area itself, that’s also a positive aspect of the page.”

For further information about the free Wi-Fi service or to enter the competition visit:

UFU Angered At Import Of 400 Tonnes Of Polish Beef

UFU Angered At Import Of 400 Tonnes Of Polish...