The Down Arts Centre which was ‘lit up’ in blue lights joins iconic landmarks throughout the UK and the rest of the world, including Trafalgar Square, Sydney Opera House, the Empire State Building, the Pyramids and the Tokyo Tower in Japan to raise awareness for Autism.

Autism is a life-long developmental disability that affects how a person communicates with, and relates to, other people. It also affects how they make sense of the world around them. It is a spectrum condition, which means that while all people with Autism share certain difficulties, their condition will affect them in different ways.  There are currently over 20,000 people diagnosed with Autism within Northern Ireland, which outstrips the total number of those affected by Down’s Syndrome, Multiple Sclerosis and Parkinson’s Disease. 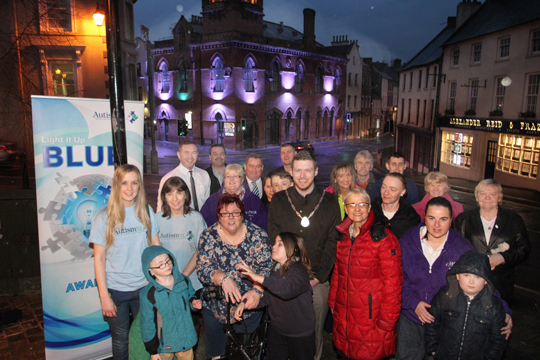 World Autism Awareness Day therefore shines a bright light on Autism as a growing global health concern. Each year Autism NI raises awareness for the disability through a coordinated Awareness campaign during the month of April, including the Stormont 5k Walk on Saturday 27 April.

Down District Council Chairman, Cllr Maria McCarthy said: “I am delighted to show our support for the work being done to promote autism awareness. By lighting up the Council’s Arts Centre we are sending out a clear message that we are supportive of the work being done on the ground to offer help and support to families in the district and across the region dealing with this disability. We hope that this gesture will create better awareness and understanding of the issue and raise much needed funds for the charity.”

Autism NI’s Chief Executive, Arlene Cassidy added: “We are very grateful that Down District Council has chosen to support World Autism Awareness Day.  It is vital that awareness is raised throughout Northern Ireland in relation to Autism, especially within the local community as there is still a lot of misunderstanding and ignorance in relation to Autism Spectrum Disorder.  By holding an event such as this, Down District Council has helped to highlight this ‘hidden disability’ and give those affected the recognition they deserve.”

Down District Councillors, South Down MP Margaret Ritchie and Martina Anderson MEP attended the lighting up of the Arts Centre to show their support for the charity.

PAPPA Events Through April To Raise Funds And Awareness

Moira Denvir, Chairperson of CAPPA based in Downpatrick, explained: “We have a number of events planned to continue to raise awareness of this isolating condition and much needed funds to continue to run the different groups.

“There will be a parents’ meeting in CAPAA at the Downshire estate premises on Wednesday 9 April at 7.30pm with two speakers talking about their service around Sensory Issues.

“We are delighted to be chosen by the artists in the Arts Group at Inch, as the charity to benefit from their Art Exhibition and Sale on Saturday 12 April from 10 to 4. Everyone os welcome.

“We have a sheet with 25 squares @ £2 per square as a fund-raiser with the Body Shop. Every sheet sold will have one winner of Body Shop items to the value of £25 with £25 given to CAPAA. You can also support us by going online to Facebook and purchasing items from the Body Shop with a percentage given to CAPAA. Thanks to Karin McVeigh for setting this up Sheets to be returned to CAPAA by Saturday 19 April for draw on 25 April.

“We are also holding a Quiz in the RGU Clubrooms on Fri 25 April at 8.30pm.  Admission is £3 per person. Everyone is welcome. There will also be a Quiz in the Harbour Inn in Newcastle on 9 May”

Moira added: “For something totally different, one of our members Charlene Molloy is doing a ‘Five Hour Sponsored Dance To Rave Music’ in the Russell Bar in Downpatrick from 8 to 1 on Saturday 26  April. Please support Charlene or bring along your dancing shoes and join her.

“Finally, weather permitting we are having a walk around Castlewellan Lake leaving the car park at 2pm on Sunday 27 April, followed by a barbecue in the park . Everyone again is welcome.

“We ask again for your support to help our work with CAPPA.”

Check Out The Covid-19 Update From The NI Executive