Minister Foster said: “Northern Ireland’s unique heritage and beautiful scenery are two of our biggest tourism assets. Down District Council has successfully combined them both in the development of a new walking trail, which is sure to attract visitors from home and abroad. 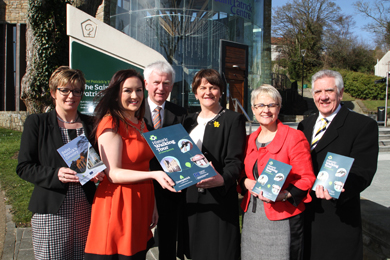 “It has never been more important to give tourists as many reasons as possible to travel to and throughout Northern Ireland. Smartphone technology means we can ensure they have information about their surroundings quite literally at their fingertips. The app being launched today, which links together 30 local sites of historical interest, does just that.”

Arlene Foster also announced that the installation of signage along St Patrick’s Way, a pilgrim walk from the Navan Centre in Armagh to the grave of St Patrick in Downpatrick, has begun.

During a visit to the St Patrick’s Centre, the Minister said: “Northern Ireland has unique and long-established links with Saint Patrick. He began his mission and founded his first church in Armagh, establishing the city as a spiritual centre. Following his death, he was laid to rest in Downpatrick.

Welcoming the opportunity to hear from the lead Councils of Down and Armagh, on their vision for the future of the Saint Patrick Experience, Arlene Foster concluded: “It is encouraging to see different partners working together to maximise opportunities from the St. Patrick experience, which allows visitors to learn about our Christian heritage and enjoy the many attractions this beautiful part of Northern Ireland has to offer.”

After meeting the Minister,  Down District Council Chairperson, Cllr Maria McCarthy, said, “I am delighted to welcome the Minister to Downpatrick, where St Patrick began his pilgrimage. It is very fitting that we should open these trails over St Patrick’s weekend, a weekend of great celebration for the District. The trails will promote St Patrick and his message while providing an opportunity for learning about his mission.” 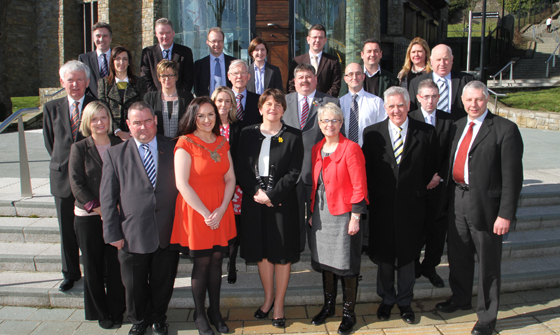 Local public representatives and Down District Council officials and from the EBR, gathered on teh steps of the St Patrick Centre for the launch.[/caption]]]>