<![CDATA[ <p style="text-align: justify;">Downpatrick’s latest lifesaving Automated External Defibrillator will be accessible to everyone in the town… 24-hours a day, 7 days a week, 365 days a year thanks to its location in a BT phonebox at Market Street.

The defibrillator, which has been temporarily hosted by Gordons Chemist for the last three months, was launched at its permanent location on Friday 6 June.  Situated at the front of the St Patrick’s Centre adjacent to the Santander Bank, opposite the junction with St Patrick’s Avenue, the life- saving machine will be quickly available to anyone needing it in an emergency, particularly the forty people who completed Red Cross training courses in Basic Life Support and AED use earlier in the year. 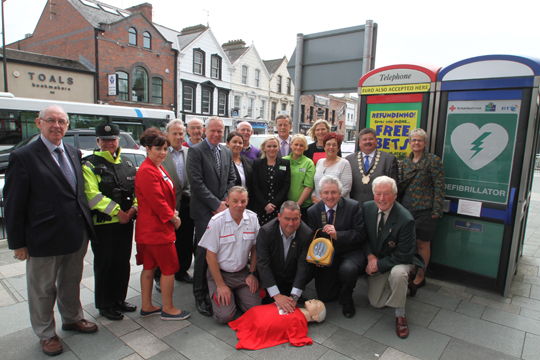 Representatives of the Downpatrick Lions, Down District Council, the Red Cross, BT, and South Down MP Margaret Ritchie at the launch of the defribrillator kiosk in Market Street. [/caption]

The defibrillator is the latest in a series donated by the Downpatrick Lions Club as part of their public access defibrillator project. Units have already been positioned at ASDA and the Down County Museum.

Project coordinator for the Lions Club, Seamus McMullan, said: “We are delighted to see this defibrillator move to a location which provides excellent public access and are very grateful for the fundraising support we have received from so many people in the town as we have rolled out the project. From the staff at ASDA, BT, Gordons Chemist, Hair Graduates and all our local members, everyone pitched in to make this a success and ultimately to make Downpatrick a more resilient town. We now have the equipment and the trained people to really make a difference if faced with a life-threatening cardiac event.” 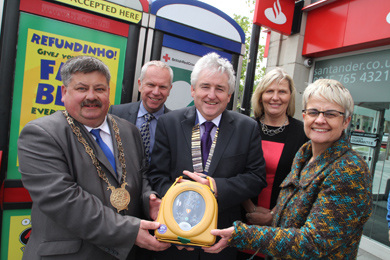 Paula Powell from the Red Cross said: “We’ve had huge interest in community defibrillators since our first one launched in a BT Phonebox in Crossgar last year and are really pleased to see the Downpatrick project come to fruition. Of course while the defibrillator is key, the other vital component has been the first aid training as this is what gives ordinary people, rather than medical professionals, the confidence to act when facing an emergency situation.”

Gareth McWilliams, BT’s General Manager for Business Operations added: “BT’s Adopt a Kiosk scheme has been a great success and has captured the imagination of many people since it was introduced in 2008. Phone boxes in GB have been turned into art galleries, public libraries, exhibitions and information centres so it’s especially rewarding to see a rarely used Kiosk put to such good use here in Downpatrick.

“Over the years, many people have said that their local phone box was a lifeline. Now that most people have access to a phone at home or a mobile that may no longer be true, but a kiosk fitted with defibrillator equipment is a genuine asset to a community and could be a real life saver in the future.”

The Market Street defibrillator can be released from the BT phonebox by calling 999 and obtaining an access code from Northern Ireland Ambulance Service, and John McPoland Chief Executive of the Ambulance Service is quick to point out the support that the service’s call handlers provide. He said;

“From the moment a member of the public is connected to Northern Ireland Ambulance Service our staff are there to support them. As well as enabling a caller to release the defibrillator we will simultaneously mobilise an ambulance and paramedics to the scene and will remain on the line to support the first aid intervention.”

The ongoing maintenance costs of keeping the defibrillator ready for action will be covered by Down District Council, who have ‘adopted’ the phonebox as part of BT’s ‘Adopt a Kiosk’ scheme as it was no longer needed as a working payphone. Down District Council Chairman, Cllr William Walker said that the entire Council felt that this was a very worthwhile project and commented: “Down District Council is delighted to support BT’s Adopt a Kiosk scheme.  I would like to extend my sincerest gratitude to BT, the Red Cross, Downpatrick Lions Club and everyone else whose work has resulted in this fantastic new use for the former phone box. I know residents are most appreciative.”

The Lions Club is already planning a fourth defibrillator for one of the more densely populated residential areas in the town.