Farmgate prices are below the UK average and many farmers are being forced to sell milk off cheaply to keep their businesses solvent.  This will have serious long-term consequences for their businesses.

With increasing stress levels on the farming community such as marital break-ups, mental health problems and suicides on the back of ailing farm businesses, local politicians are seeking solutions to the problems of supply and demand in dairy farming, now a volatile sector across the rest of the UK and Ireland. Stress in the farming community is at a serious high level, and there is a danger that communities may start to buckle under the pressure, undermining the very backbone of social cohesion.

Ritchie Says Government And EU Must Act On Dairy Crisis

SDLP MP and Member of the Environment Food and Rural Affairs Committee Margaret Ritchie has called on the government and EU to take urgent and meaningful action to protect dairy farmers. 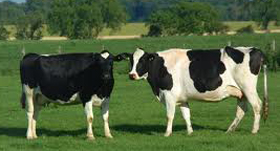 The dairy industry is in trouble and local politicians seek solutions.[/caption]

Speaking in the House of Commons, Ms Ritchie highlighted that domestic and international factors have compounded problems in dairy market, threatening the future of dairy farmers.

She said: “The dairy industry is facing a crisis and is under extreme pressure due to the implications of global factors that are causing an imbalance of supply and demand in the dairy industry. Farmers are now paying more in production than they can expect in return.

“The farmgate milk price in Northern Ireland reached 19p per litre in December, worse than anywhere else in the UK. With a break even cost of 28p dairy farmers in Northern Ireland and throughout the UK are facing an impossible situation and are in need of immediate support from the government and the EU before this crisis deepens.

“I know from speaking with representatives in Ulster Farmers Union that there is frustration that certain retailers are selling milk at prices as low as 2 litres of milk for 79p. Such low prices are short sighted and undermine farmers’ security at an already vulnerable time.

“Added to this issue of competitiveness between retailers is the current exchange rate. With the Euro currently weak against the pound, it is making imports cheaper and exports more expensive.

“The EU must take meaningful action and increase the Intervention Level before the EU Milk Quota system is lifted on 1st April. The current level was set over a decade ago and is far too low to offer meaningful protection to farmers.”

Ms Ritchie added: “My EFRA Committee colleagues and I also call for Secretary of State for Department of Environment Food and Rural to expand the remit of the Groceries Code Adjudicator to include small-scale suppliers.

“Intervention is not an option; but a necessity. We need action at both government and EU level to properly protect farmers in the long-term in the face of this market volatility. There will come a time when the markets improve and we will need this high quality produce, and there may be a shortage of farmers left producing it.”

John McCallister Independent Unionist MLA for South Down, with a farming background, recently accepted an invitation to visit South West Wales and address the North Pembrokeshire Grasslands Society about the challenges facing the diary sector across the United Kingdom.

Discussing his visit in late January Mr McCallister said: “Northern Ireland, like Wales, is very dependent on its Agri-food sector and it is always important to share our challenges and learn from each other’s experiences.

“For these reasons I was extremely pleased to accept the invitation to South West Wales were I was fortunate enough to visit a number of diary farms and a beef unit. Northern Ireland and Wales can benefit from working together in a UK and European context.

“I hope to build on these connections by bringing members of the Society to Northern Ireland in the near future and develop upon areas of mutual benefit.”