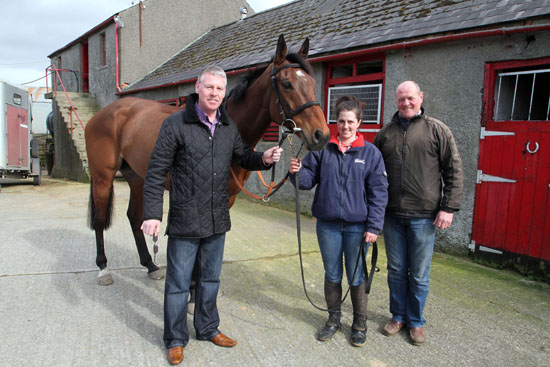 The finish to the Cheltenham Festival Foxhunters on Friday, the premier chase for amateur riders at the festival which follows the Gold Cup, was fought out by two Ulster owned and trained horses writes Joe Kavanagh.

Irish horses have performed well in this race. In the last ten years alone, four winners have been favourites.

The popular and brave Carsonstown Boy trained at Crossgar by Colin Mc Bratney and owned by Jim Monaghan from Ardglass was at the head of affairs throughout and this 40/1 chance was still full of running and in the lead at the penultimate fence.

James Smyth on Tammys Hill, owned by his father Patrick, waited in mid division for most of the race prior to moving of the rail just after the water jump to take a better position to challenge four from home, Mister Cool. James Smyth had a look around before joining Carsonstown Boy and Ulster Region Champion rider Noel Mc Parlan in front and after the final fence as favourite.

On The Fringe with Nina Carberry aboard challenged Smyth asked the local horse to give his all and soon went clear galloping up the final hill to score easily by  3 ¼ lengths with the local rider already saluting the massive crowds in the stands prior to the winning post.

The Cheltenham Foxhunters winner is trained in Newry by Liam Lennon with his brother and assistant trainer, Declan leading up the horse at the festival fixture.  Lennon has a team of twenty horses in training divided between the course proper and point to points.  The duo filling the first two places in the Foxhunters – the major hunterchase of the season in the UK provided a massive boost for the Northern Region point to point circuit – already recognised as the most competitive in Ireland.

A very nonchalant James Smyth said after  passing the post: “ He travelled brilliant the whole way and jumped perfectly.  We have been trying to get him here for three years, ruled out the past two years due to minor ailments such as coughing last year].”    Tammy’s Hill had already beat On The Fringe in the principal hunterchase on Hennessy Gold Cup day at Leopardstown before disappointing when fourth over a shorter trip at Fairyhouse and trainer, Liam Lennon who finished fourth in the same race as a rider on Joe Blake in 20 February,  said : “He’s been to England a couple of times and disappointed and ran in the Horse & Hound Cup at Stratford last season.

“He has been in great form at home and we were confident he would run well if repeating his Leopardstown effort.  They [the Smyth family] deserve this big win as they have stuck with the horse each season and he has got better each season. . It’s unbelievable – totally unreal. It’s a great achievement for the Smyths as they bred this horse themselves and it’s some achievement for James. He’s 35 now and in his twilight years. ”

The trainer also advised the big race winner might go to the course proper with the Irish Grand National under consideration but will wait until the horse returns home before discussing with the owner future plans.  While the local rider added: “ Tammys has won about 17 races between hunterchases and points now and it does not get any better than this!”  He added that the Champion Hunterchase at the Punchestown Festival is a possible target next month.

Colin Mc Bratney, trainer of the runner-up advised: “ The horse did us credit. There was one just too good but I’m glad it was Liam’s horse that beat us in the big one.  I’ll get him home and see how he is and the big Punchestown Hunterchase would be a possibility.”   A return bout looks likely for the two local County Down hero horses.

A delighted Jim Monaghan, owner of Carsonstown Boy, said that his horse was ten years old but there was plenty of running  in him yet.  “When I bought him off Colin McBratney back in 2011 Colin said he would make sure he was a winner for me and he has been true to his word. I’m just over the moon that we have had a chance to run in Cheltenham and performed so well. We didn’t win on this occasion but it was a close cut thing. I must also thank Colin’s assistant Shaneen who turns Carsonstown Boy out so immaculately.

“Carsonstown Boy loves to run in these foxhunters three miles events and we always look forward to his races. Our interest in racing began with buying a pony for our children when they were small and before we knew it we were involved in the point to point. From there we had seven winners and progressed to a hunting chase at Thurles. We received a lot of help too back then from ‘Dart’ Curran and his son Richard beside Ardglass who are still training. We did have one other race horse but that ended up in showjumping and did well. My wife Sharon and daughters Sharon and Lesley are all involved in horses too.  We all love the social buzz around horse racing.

“Jockey Noel McParlan has a great relationship with Carsonstown Boy and gets the best out of him. We may run in the Joseph O’Reilly hunt chase in two weeks but I will leave that up to Colin who has an eye for when a horse is best to run. Noel has given us tremendous service as a jockey and he really is half the win.

“One day inevitably Carsonstown Boy will retire and he will be well looked after in our stable at home. We have a sand manage area for him to trot around in too.

“He certainly was a good each bet in this race at Cheltenham and was a whisker away from winning. A re-run against Tammys Hill would certainly be a of interest to the local punters.”