<![CDATA[ <p style="text-align: justify;">DOG owners in the District are being urged by Down District Council and Down Policing and Community Safety Partnership (PCSP) to be responsible and clean up dog poo  from their pets and use the public litter bins appropriately.

In addition, members of the public are encouraged to fight back against dog fouling by continuing to report incidents to help tackle the problem which blights many open areas throughout the district. 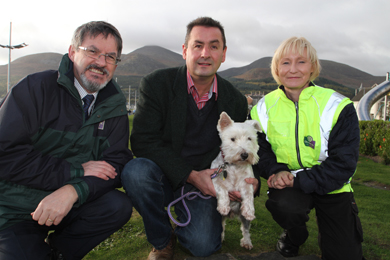 PCSP Chairman Councillor Willie Clarke said: “The Engagement Committee of the PCSP have met with representatives from communities across Down District to discuss this issue. Without fail, each community highlights the problems they face in relation to dog litter.  People are frustrated and fed up about the irresponsible attitude of some dog owners and the impact it has on how they feel about their community.

“It is widely accepted that people feel safer when they are in a clean, well maintained environment.  The appearance of litter, graffiti and dog fouling on our streets is unacceptable and we work in partnership to address the problem effectively.”

Down District Council Chairman Councillor Maria McCarthy added: “This is a perennial problem across the District and while we are targeting our limited resources in the three main areas of Education, Enforcement and Cleansing, we recognise that we will never eradicate the problem completely. However, with the support and engagement of local communities, we can reduce the magnitude of the problem by encouraging a change in attitudes which will lead, over time, to a change in behaviour.

“Down District Council’s Environmental Services Department is again being bombarded by complaints of Dog Fouling in our local communities. Despite patrols of the area by Enforcement staff and new signage in the area warning people to clean up after their dogs the problem still persists.

“The Council do recognise that most people take a pride in their community and we want to make it clear that we will do everything we can to try and reduce this problem which is not only a blight on the environment but also very damaging to humans especially children. Good hygiene practice namely cleaning up after your dog will help eradicate this problem leaving our parks and streets safe for children.”

Under the Clean Neighbourhoods Act, Down District Council have the powers to issue Fixed Penalty Notice’s to anyone who fails to clean up after their dog. The fine at present is £80 and the Council operate a zero tolerance approach to offenders.

Along with enforcement, education also plays an important part in the campaign against dog fouling and if anyone wishes to seek advice on responsible dog ownership please do not hesitate to contact the Council’s Environmental Health Department on 028 4461 0824, where the Enforcement Officers and District Wardens will be happy to speak to anyone seeking help.