<![CDATA[ <p style="text-align: justify;">At Down District Council’s recent Equality and Diversity Working Group meeting, Ray Cunningham from Mind Your Mate & Yourself provided an update on the work of the Public Initiative for the Prevention of Suicide and Self Harm (PiPs) which operates in Newcastle and across the district. 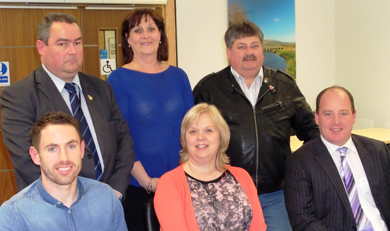 The Down District Council Disability Committee recently met representativews from suicide awareness groups PIPS and from the Siuth Eastern Trust.[/caption]

People who complete the PiPs training programme learn what to look for, what to say and what to do when they become aware of a person who may be contemplating suicide. He highlighted the need for improved counselling services as the number of people asking for help continued to increase and said that the way forward in helping people in this situation was to restore their self-esteem.

Alison Doake, South Eastern Health and Social Care Trust Health (Development for Suicide), advised what steps were being taken to identify and help those at risk. These included improving understanding about the complexity of self-harm, the provision of support to individuals and a forum for the sharing of best practice.

Councillor Terry Andrews said: “People who find themselves in depression and considering self-harm need to be helped and the existing organizations  such as  PiPS and the South Eastern HSC Trust were providing important work in this area.”

Councillor O’Boyle further added: “A number of suicides have taken place in the district affecting all ages, everything must be done to ensure information and counseling is available for those at risk.”

For further information about Mind Your Mate and Yourself email  mindyourmateandyourself@gmail.com