<![CDATA[Ballynahinch Councillor  Mickey Coogan has called on local communities to help combat vandalism and antisocial behaviour in their own areas following damage to new signage on Windmill Hill Wood. Councillor Coogan said: " I was contacted by a number of residents in Windmill Avenue about vandalism on the recently regenerated Windmill Hill Wood in Ballynahinch and was struck by their feelings of helplessness. There is a perception that the PSNI, Council and Social Services are doing or can do little or nothing to prevent underage drinking, street drinking or vandalism. Communities feel resigned to the fact that they just have to accept it." [caption id="attachment_35443" align="alignleft" width="390"]<a href="http://www.downnews.co.uk/wp-content/uploads/2013/01/coogan_vandalism.jpg"> 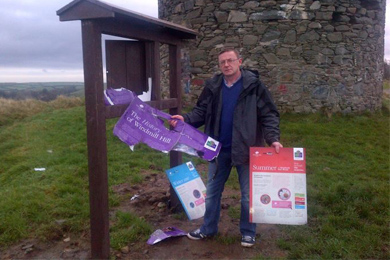 Ballynahinch Councillor Mickey Coogan is calling on a community response to tackling antisocial behaviour on vandalism after new signage on Windmill Hill Wood was destroyed.[/caption] “To remove all of these issues completely would be difficult if not impossible but it should not mean that we just give up or that we don’t invest in our local communities. When the Council and Woodland Trust came together to regenerate the Windmill Hill, they did so to provide a faciltiy for the community. “They involved the local community in the project and I met with school children from St Patrick’s Primary School who were involved in planting on the hill. When we sign off on these projects we are aware of the risk of vandalism, and some would argue, ‘why bother’. But we are also aware of the value of the project to the local community and that is and always should be the deciding factor.” Councillor Coogan added: “I was angered to see the damage done to interpretive signage at the Windmill and like many others felt a bit frustrated and helpless. ” I have contacted the Councils Parks Department, and the Policing and Community Safety Partnership to replace the signs and to arrange a meeting with local residents, schools, sporting groups and statutory agencies to try and find ways to work together to try and deal with the wider issues of antisocial behaviour.In the meantime I would encourage people to pass on any information they have either to me or the relevant agency.]]>