Speaking from the House of Commons Ms Ritchie said: “While I welcome some of the proposals announced today, including the Bill of Rights for Consumers, this seems to be a programme for government from a coalition that has lost direction and impetus. The government’s desire to flatter UKIP and talk tough on immigration will do nothing for those suffering the effects of falling living conditions or those in search of a job. 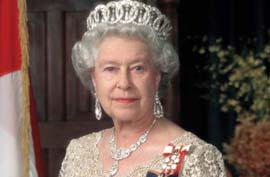 Queen Elizabeth II made her annual speech in Westminster.[/caption]

“We need policies that promote growth and stimulate the economy but instead are left with a threadbare and sparse legislative agenda that will do little to deliver for Northern Ireland. The government has also announced its first Northern Ireland bill and we will await the details of this with great interest.

“There is also a great degree of concern over what was not included in today’s speech, particularly the government dropping the proposal to underwrite in law the commitment to spend 0.7% of Gross National Income on international aid. Such aid is critical and this decision undermines this government’s claims to support international development.

“Two years away from a British General Election this coalition government seems to be adrift and the measures outlined today will do little to deliver an economic recovery for people in the north of Ireland,” assed Ms Ritchie.

NIIRTA Chief Executive Glyn Roberts said: “The devil is always in the detail in the legislation in the Queen’s Speech and we will be  scrutinising further its impact locally on our members and its implications for Assembly legislation

“NIIRTA welcomes the National Insurance Bill, which has the potential to help local shops with their staff costs, which, alongside property, represents one of the biggest costs small retailers face. We will be working closely with the Government, and Parliament, as the Bill is introduced, to ensure the legislation is easy for retailers to take advantage of, and does not contain any unforeseen complexities that may increase the regulatory burden associated with it.

“The Deregulation Bill to reduce the burden of unnecessary legislation on firms looking to grow weeding out unnecessary red tape and burdens for small traders is welcome. The Bill will include a duty to require non-economic regulators to have regard to the impact of their action on growth and exempting from health and safety laws those self employed who pose little risk.

“The Consumer Rights Bill is good news for our members as it will consolidate all consumer laws into a single Act, and aims to make the law clearer in the areas of consumer standards (setting out, for example, what a seller must tell a consumer before they buy) and enforcement (with the aim of tackling rogue traders and making it easier for smaller businesses to take legal action against bigger companies breaking competition laws)”.