FNT’s combination of live sketches, guest stand up, video sketches and live original scored music make it the only show of its kind in the UK and Ireland. With members from mixed religions, mixed sexuality and mixed socio-economic backgrounds (some of them are ghetto) they were brought together through a love of comedy 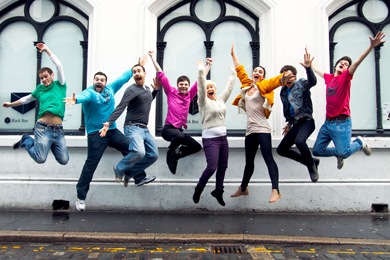 Don’t miss FNT at the DAC.[/caption]

Creators Jordan Dunbar, Marc McElroy and Tom Flight all bonded over a shared love of Saturday Night Live and wanted FNT to have a feeling of its topical, live and vibrant edge with a British/Irish twist. FNT say they owe it all to Lord Julian Fellowes, as creator Jordan Dunbar only decided to put the group together after working with Julian and receiving a screenwriting award from him. This accolade allowed him to persuade co-creator Tom to give up his life and job in England to move to Belfast. They booked a venue and paid the deposit without having any scripts, actors or clue. As they say, the rest is history.

FNT launched their parody ‘Nordie Shore’ in a publicity stunt that became one of the biggest of the year. Both press and public fuelled rumours of the show and on its launch, propelled it to one of the most watched videos in the UK and third in the world. The Irish rugby team, Miss Ireland and even author Colin Bateman became fans along with the 1.5 million people who logged on to find out more.

Other celebrity supporters include former South Park and Mad TV writer, Toby Morton, who wrote for and worked with the group for six months; comedienne Jennifer Saunders, who liked FNT so much she donated a personal voicemail to raffle as part of their Fringe Fundraiser, and finally Hip Hop star Sisqo, who liked FNT so much he asked to do a sketch with the group, and who were they to say no?

To purchase tickets (£10 / £8) and for further information on any Down Arts Centre events, please contact the box office on 028 4461 0747. The complete Down Arts Centre Season Programme is available to download at: