<![CDATA[ <p style="text-align: justify;" align="center">In recent years there have been a number of serious flooding incidents in Newcastle and a solution has been called for. 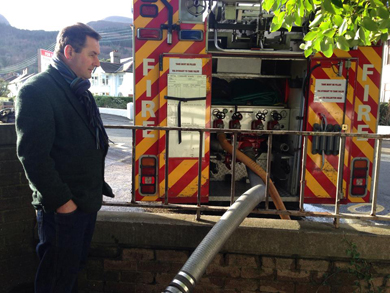 Cllr Clarke pictured at the location where earlier this year the Fire Service had to be called to help alleviate flooding to local homes.[/caption]

Sinn Féin Councillor Willie Clarke has welcomed a commitment he has received from the Rivers Agency to take additional  measures to alleviate a flooding problem in the Shanslieve Drive and Bryansford Road area of Newcastle.

He said: “Following representations from a number of people I undertook to organise a site meeting with Rivers Agency to ensure this problem is rectified. The Rivers Agency have carried out a number of flooding preventative measures including the installation of grills to prevent large debris entering the storm drain, a blockage which caused the flooding of homes in the Bryansford Road are of Newcastle earlier this year.

“During the meeting Rivers Agency have now made a commitment that they will undertake work to resolve this problem, including  a CCTV survey of the Tullybrannigan Road culvert to ascertain any structural failings. They will also undertake a piece of work which will involve installing an additional section of drainage pipe, away from the vicinity of Shanslieve Drive and down towards the main road to tie in with an existing waterway.”

“During a preliminary investigation a small pipe was found to be blocked on the Bryansford Road, which has now been jetted to find the discharge location and Rivers Agency staff will make contact with the agent of the existing owners of the Primary School to carry out regular maintenance of the water course. I would like to thank Rivers Agency for their cooperation, that will ensure we do not have a repeat of flooding at this location,”  added Cllr Willie Clarke.