<![CDATA[ <p style="text-align: justify;">After three rounds of the audience going mad in the Bridge Centre in Killyeagh, the much awaited boxing bout between Down District Councillors Billy Walker and Terry Andrews was announced as an “honourable draw”.

The two – who are the best of friends – decided to organise a fundraising boxing match in aid of the youth of Killyleagh and at a later date added on PIPS, the suicide prevention group.

Their historic match succeeded in raising over £2000. 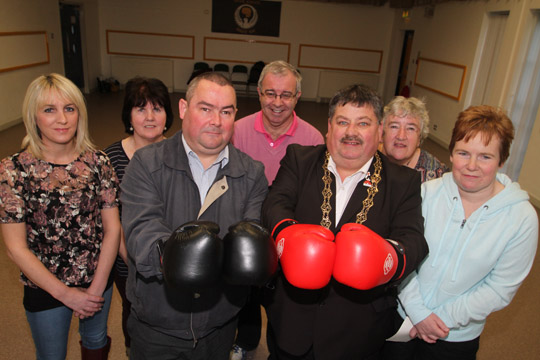 Event organiser Chris Hagan said: “This indeed was a battle of the bellies and the only fair decision in the end was an honourable draw. Both has been in training for several weeks at East Down Boxing Club and I believe Aj’s restaurant with full fries.

“This event was very well supported and it is a credit to both councillors for getting down to it and slogging it out in the ring. We had the Order of Malta on stand-by in case of any injuries or difficulties but all went well on the night.”

Rowallene Councillor Billy Walker added: “The fight on the 24 October was great fun and we are privileged to have raised vital funds for our special local charities. We had been already talking to the Killyleagh Youth Club and PIPS. Once the idea was floated during the Killyleagh Fun Day as a joke but it just took legs and developed from there. Before we knew it it was up and running.

“It was tough in the ring and I don’t underestimate how fit real boxers are. On the night we had a great display of boxers from the East Down BC and from Castlewellan and the audience were well entertained.

“I would just like to thank all the supporters and organisers of this event including Chris. It was a great success. The real winners on the night were the two local charities.

“I am however disappointed that Radio/TV presenter Stephen Nolan could not take up the offer of fighting the winner of the next bout in a match in the Down Leisure Centre. It appears that his BBC contract prevents him from getting involved in such events.

“We certainly need to find innovative ways to raise money for our local charities and youth.”

Maureen King, PIPS representative added: “We are delighted at the amount raised by the boxing match. PIPS is certainly going to be more v isible in the Killyleagh area and we are going to make a counsellor available in the near future located at the Bridge Centre.  At the moment we are seeing 45 people a week in Newcastle so you can imagine the local need for these services in rural areas.”

Having caught his breath back, Cllr Terry Andrews also commended the supporters and organisers and said: “This boxing match was certainly a challenge for us but we were up for it. I’m just delighted to have been able to support these charities”.

So both Councillors live to fight another day… and Stephen Nolan has also survived the risk of getting his jaw broken… and all for charity!