Attended by more than ninety representatives of local voluntary and community groups, Councillors, and statutory bodies, the mood was celebratory as the Network marked 20 years of community development work in County Down. 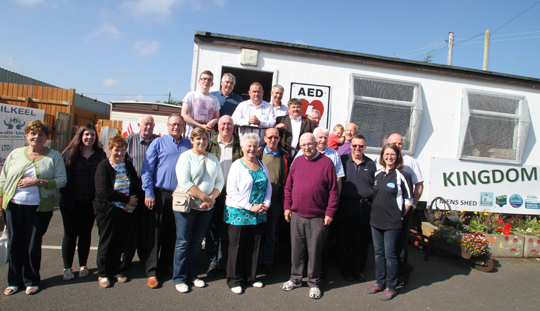 Members of the CDRCN at the Men’s Shed beside the Kingdom Youth Club.[/caption]

From humble beginnings in 1995 with a grant of just £500, the Network has grown and expanded to encompass a range of community programmes including health development, rural development support, active communities, inter-estate programmes and MARA, as well managing the Ballymote Business and Community Centre.

Nicholas McCrickard, CDRCN Manager, said:  “It is a wonderful achievement to celebrate 20 years of community development. This year we supported over 300 community groups across North Down, Ards, Newry, Mourne and Down to achieve their aims, making life better for local people and communities. 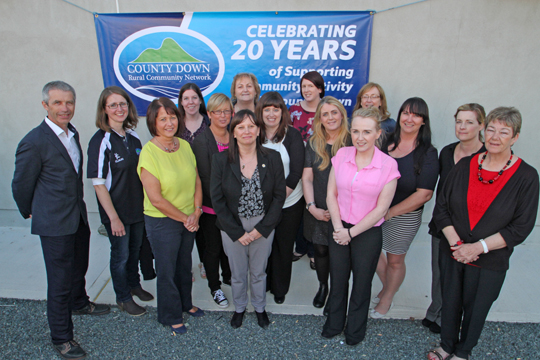 County Down RCN manager Nicholas McCrickard with members of staff.[/caption]

“As a Network we are now working to build relationships with the new Councils and our statutory partners to ensure that the needs of local communities remain to the forefront of the new Community Planning agenda, and to ensure that County Down Rural Community Network will be there to meet and support those needs.”

The day started off with the annual showcase of visits to local community projects. The first stop was An Riocht GAC in Dunavil, where visiting community groups were treated to a tasty lunch followed by a talk and tour of the fantastic facilities and services including the Kingdom Community Gym, Kingdom Youth Club, Ladies of Mourne and the Kingdom Men’s Shed. 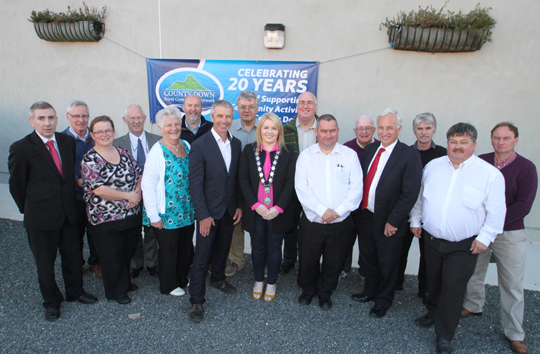 Next stop was a talk and tour of the Ballinran Community Centre which provides meeting and recreational space in the foothills of the Mournes, followed by an informative tour of the Tollymore Follies restoration project with The Mourne Heritage Trust.

Last but not least, was an address from the Mourne Mountain Rescue Team in the impressive new Annsborough Community Centre, which was built last year by the local community forum with grant assistance through the Rural Development Programme.

Councillor William Walker speaking in Annsborough Hall, said:  ‘This was a fantastic opportunity to visit different projects. As an elected representative, I commend the work of all the volunteers who work tirelessly to provide essential services and facilities in their local areas. In particular I commend the work of County Down Rural Community Network which is an invaluable source of support to local communities.”

A special 20th Birthday cake was cut to mark the date and it was noted that many millions of pounds of inward investment had been secured by community groups through those two dynamic decades.

New community halls, playparks, walking routes, renewable energy projects and social economy projects as well as a huge range of health and community programmes have benefitted from the highly professional and dedicated support available to local groups from the County Down Rural Community Network.