<![CDATA[ <p style="text-align: justify;">The one thing you learn when you are out on a bike when you have your head down is that if you haven’t cottoned on to the fact that you are riding into a head wind then the noise of oncoming traffic from a distance will tell you that the wind is in your face. Walking up to the Club on Sunday afternoon after the Juvenile Sponsored Walk I couldn’t hear the noise in the Meadow writes MArtin MacClean.

Children enjoying themselves usually raise the decibels at any venue. The wind was on my back carrying the noise away from the club toward Church Avenue. As I approached The Club and The Meadow it was soon very clear there was plenty of noise generated by the fun our young juvenile members were having. The sponsored walk was well attended. The meadow was bursting with young members and their mums and dads enjoying the events laid on the pitch after the walk. One skite of rain interrupted the walk for a very short period but happily it was just that. Well done to all the young members who participated and raised club funds. 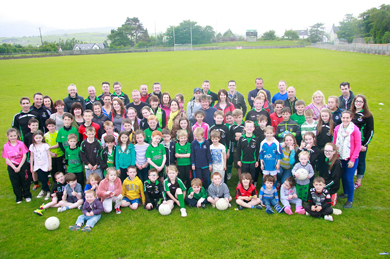 Participants in the sponsored walk.[/caption]

There were sons there doing their mothers favours – yes mothers and their sons! Take young Jasey doing goals and the youngsters were taking hurling pucks at him. Well he saved them all. The object was to let the wee ones score – give them confidence. Now Mother Betty who is not a bad goalkeeper herself steps up. What do you know, he lets every one of her pucks in. It was Jasey’s turn to make the make the dinner on Sunday evening – I heard Betty saying “its ok I’ll do your turn son!” With penalty kicks at our Club and County keeper Michael Cunningham, sack races and obstacle races it built up for a great finale – the Tug Of War. The holders in the club are the girls! They successfully defended that title on Sunday. Well this was a cases of Fathers and their Daughters.

The boys played a fair game but in the end the girls won in a first to three winning pulls. Well done to everyone who made the day so special. To the parents and children, to those who provided refreshments and food and all those who organised the day a big well done! Thanks to Jasey and Big Mick for their goalkeeping exploits though it has to be send your mum’s a better keeper Jasey!

This week saw the Under-16 camogs continue their winning streak. They played Kilcoo on Tuesday evening. It was a strong Castlewellan side who beat their neighbours a great display winning 7-21 to 2-2. The girls played with great skill and were impressive. Training continues as usual Well done to Amy Barr and Sorcha McCartan who played in County Laois on Saturday for the Down Under-14 Development Squad. The Down girls beat Kilkenny, Laois and Wexford at this all day blitz. The Under-14 camogs will play Aghaderg away this Friday evening.

The Under-14 ladies footballers were at home to Bryansford on Sunday. Having had no games for some time it was going to be a difficult match for them. They started well, however, faded to a well drilled and determined Bryansford team. Final score was 3-2 to 6-11 in favour of Bryansford. Scores for The Town came from Nadine McAleenan, Alanah Megoran and Erainn McVeigh. The Town girls showed glimpses of what they were capable of but just couldn’t maintain this throughout the game. Keep chipping away girls it will come good! Training continues on Thursday’s at 6.30pm with everyone expected to attend. The older Under 12 girls are encouraged to attend also. Next game sees the girls go to Carryduff on Sunday. 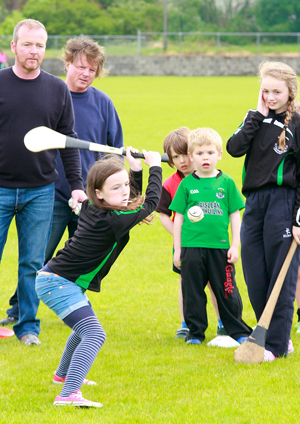 Fun during the sports’ day at the club.[/caption]

The Under-12 Camogs travelled to Attical on Tuesday evening. The girls put on a great display, playing some excellent camogie to come away with a very good win. Well done girls and keep up the good work.

The Under-12 Hurling team had a good win in The Meadow on Thursday evening against CPN Warrenpoint. After an even enough start the boys upped their game and hurled well to win convincingly 2-7 to 0-3. Scorers Matthew McCabe 1-4, Joe O Boyle 0-2, Morgan Croskery 0-1 and Dara Rodgers1-0. Well done lads and keep working on those skills! There is training on Monday evenings at 6.15pm for P3 up to Year 8 in St Malachy’s Park.

There will be another order for club gear which will be sent to O’Neill’s in September 2014. There is a stock of club socks and shorts held in the club at present. Please contact Brian O’Neill if you wish to make an order for gear other that what is held in The Club.

Castlewellan Under-16 Boys footballers played out a highly entertaining draw against Bredagh on Sunday. Indeed it will be the Town lads who will feel aggrieved that they didn’t take all the points with Bredagh equalizing at the death. Having played out the whole of the first half with only 14 players the boys can be proud of themselves with the effort and commitment they showed and in truth bossed the half.

Aided by a strong wind the boys played some great football and rattled of some great scores, notably by Gareth McKibben, Adam Garland and James McAleenan. However, Bredagh hit back with 2-4 and led at the break by 2-4 to 0-6. In the 2nd half the introduction of Mathew Carville not only evened things up but gave an added threat going forward, linking well with Garland to hit the net and with Joe Cunningham to point to make it all square. The Town pushed ahead with further scores from McKibben, McAleenan and Garland and when Bredagh scored a break away point the reply from The Town was instant when Eoin Travers squared to Cunningham to fire into the net to further The Town’s advantage.

It was Bredagh who finished strongest though, hitting 1-1 at the death to level the match at 2-12 to 3-9. But for a heroic save by The Town keeper Cathal Caldwell it could have been worse. Everyone in the team played well with Ruairi Feenan, James McAleenan, Gareth McKibben and Joe Cunningham starring.

The Town have made life a bit difficult for themselves following last Friday evenings defeat to Ballyholland in The first round of the Down Senior Football Championship. It is stating the obvious but we all know that league form counts for nothing in the Championship and so this was the case. We came back into the game and drew level after a poor first half. With that momentum we should have pushed on. In fairness to our opponents they stuck to their game plan and eaked out the win which in the end they just about deserved. So it is back to the drawing board for us. To a certain degree our fate is in our own hands. That defeat hurt and that is good!

The Juvenile Coaching Programme Spring/Summer Schedule 2014 is now on the notes column on our website at:

Outdoor juvenile coaching programme will continue in St Malachy’s Park every Saturday. Please bring both indoor and outdoor shoes as coaching will be inside if it rains.

The ‘You & Me Play Camogie’ Initiative continues at the Bann Road this Wednesday evening at 7.30pm. Parents/Guardians are invited to participate in this programme. We are looking forward to your participation in the programme. Equipment will be provided. For more information contact: Noreen on 0773820 6074.