<![CDATA[ <p style="text-align: justify;">On a bright sunny Easter Monday the Harry Clarke final took centre stage in Drumaness. Castlewellan certainly went into the game clear favourites to bring the Harry Clarke trophy back to the town. But as the game started in frantic fashion with both sides giving their all, Newcastle took the lead in thirty seconds through Neil Corr when he beat Rory Burns from a slick counter attack writes Joshua Bunting. 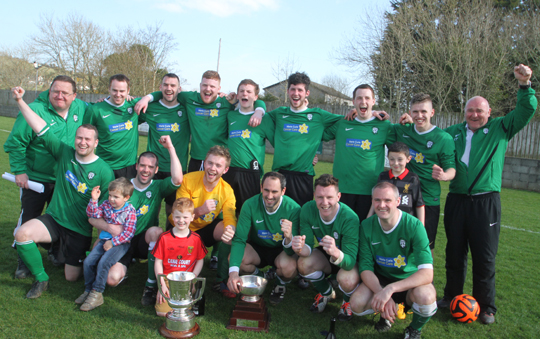 With the underdogs now surging ahead on the scoreboard, how would Castlewellan respond?  They had six of their regular first team out of action due to a Gaelic football commitment on Tuesday evening at the Burren. So on paper the reality looked much more even. 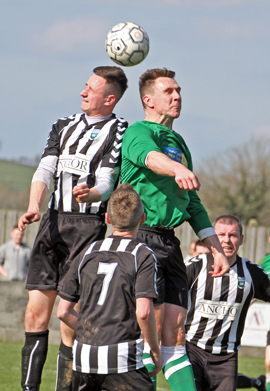 But the question was answered immediately when Castlewellan launched a quick attack within minutes and equalised through Karl Jaroinski when his volley flew past Paddy Baker into the Newcastle goal. This was a tremendous start to the opening of the game which promised to be an Easter cracker and fans on both sides got ready for a soccer spectacle.

Both teams started to settle down after this frantic start getting to understand each others strengths and weaknesses, with Newcastle packing the midfield frustrating Castlewellan as they tried to counterattack.  Newcastle’s Declan Allister made a terrific tackle on twelve minutes to deny Donall Steele getting a clean shot at goal from the edge of the area.

Newcastle who in most people’s eyes where only in the final to make up the numbers started to look like serious contenders fro the cup  but were not creating any real clear cut chances but made a number of very useful build ups and attacks.  Castlewellan keeper Rory Burns was rarely troubled in the Town goal. Sean Russell was definitely commanding the Castlewellen defence really well and it was he who saved his sides skin when Pearse McCarthy’s free kick was floated into the area and he headed it over his own crossbar out for a corner.

Castlwellan took the lead in 27 minutes when Stephen Trainor found the back of Baker’s net when a superb build up saw Trainor nick in at the back post into into the net. This goal was hoped by the Town camp  to open the scoring floodgates but it didn’t happen as Newcastle plugged away at their opponents trying to get level by half-time. 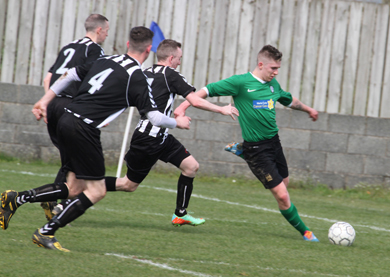 Karal Jaroski making a cross for Castlewellan under pressure from Newcastle defenders.[/caption]

Gavin Moore was giving Castlewellan nightmares down the flank with his constant running and trickery was taking out the defence and allowing Newcastle players to peel off their markers and charge into promising positions.

However, the match went all square once again when Declan Allister floated in a free kick on the 41st minute which freakishly found the back of the net when Burns came out of position and missed the ball…  a deserved equaliser.

Newcastle too had managed to contain the Castlewellan attackers by a careful discipline in the back line causing the Town significant problems.

With the scoreline at 2-2 as both teams commenced the second half, an Newcastle came out boosted by their half-time pep talk looking the sharper of the two. Felix Valentine had the first chance as he combined well with Conor Hayes to shoot into the midrift of Burns. This chance brought the Newcastle support into life spurring the team on the pitch. Adrian Kelly came to his side’s rescue when Moore cut inside down the right about to pull the trigger for a third goal only for a superb last ditch tackle. 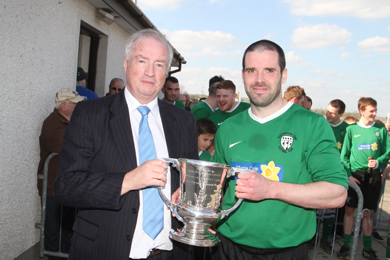 Castlewellan buckled down and played their way back into the game creating chances, the first coming when Niall Toner whipped in a delicious ball to the back post for Juroski to head into the grateful clutches of Baker. Newcastle were starting to get penned in with Donagh Steele playing to Stephen Tierney down the right to fire inches away from the right hand post. Newcastle’s Declan Allister, was defending superbly not giving the town any time to settle on the ball.

Lee Ward who came off the Castlewellan bench was involved straight in the action as his cross found an unmarked Steele at the back post to put the ball in the net only for his celebrations to be short lived as he turned to see the flag raised. A big let off for Newcastle but they eased their way back in the contest when Burns made a terrific save to deny a certain goal when Newcastle’s David McKenna’s header looked set for the bottom corner of the net. 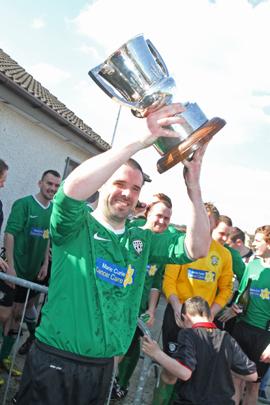 Castlewellan FC captain Conor Stratton holds up the Harry Clarke Cup to the delight of the Town fans.[/caption]

McKenna was playing exceptionally well considering he was the lone striker holding the ball up and allowing his teammates to counter with him . This was most evident when a long punt upfield by Baker was taken down.  He held off several challenges to lay the ball off to Neil Corr, but he was stopped in his tracks by Conall Burns.

This match was a great spectacle for the fans, a cup final that threw caution to the wind with Newcastle II’s looking the most threatening as the clock reached 70 minutes of play. At 76 minutes Newcastle’s Gavin Moore and Felix Valentine played a wonderful one-two teeing up McKenna to shoot who blasted just over the bar.

The Town knew they were in a game as Newcastle where throwing everything but the kitchen sink at them. Then Castlewellan’s Sean Russell played a superb ball over the top for Steele, the shot looking set for the net only for a great reaction save from Baker as he tipped the ball out for a corner. From the resulting corner it looked like Castlewellan had stolen a late winner as John Clarke rose into the air to head just over the bar.

The 30 minutes extra-time kicked off the way the second half had ended with a Castlewellen attack with Karal Juroinski winning the ball from deep and driving towards the Newcastle defence before unleashing a spectacular drive just wide. This was all about who would hold their nerve and which team could cope with the fatigue factor the best. Keeper Rory Burns came to his side’s aid when he kept out a stinging Gavin Moore volley when it looked like it was heading into the far corner of the net. 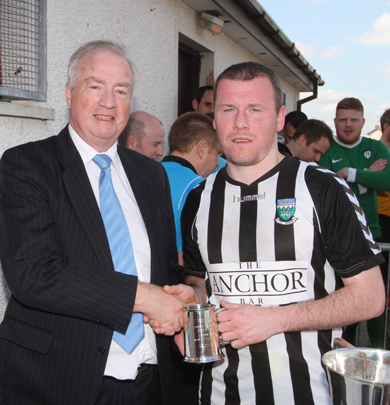 This game started to take centre stage in midfield and after a few physical tackles it started to heat up a little and get feisty. Nevertheless, this match really was a great advertisement for local football showing total commitment from both teams. The last action of the first extra-time period saw underdogs Newcastle take the lead when a low cross was turned in past Burns by the impressive McKenna to raptures and roars from the Seasiders supporters.

With Castlewellan now trailing 3-2 and having it all to do, a Harry Clarke cup upset was on the cards. If you looked at the route to the final you would have said Castlewellen would be comfortable winners but football really is a funny old game.

Newcastle became more defensive trying to protect their one goal lead. Lee Ward had the first chance of the half for the Town when he picked up a loose pass from McCarthy to shoot goalwards only to be denied by a great save from Baker to deflect the ball away from goal. 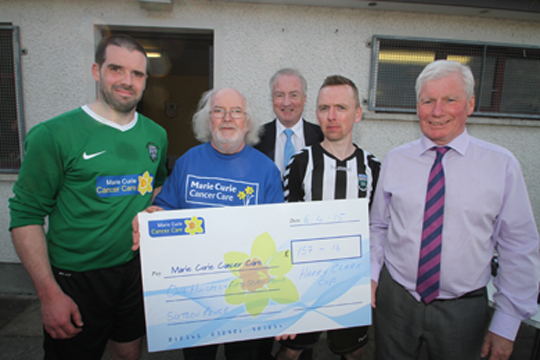 Tiredness was starting to set in it was very evident to see as Castlewellan started to crank up their game as the minutes passed by. Sean Russell’s long ball fell in behind the Black and Whites defence creating an opportunity only for Baker to rush out and clear. Every pass that Newcastle were making was getting picked off by a player in a green shirt as the onslaught continued. Juroski must have thought he had the final chance when his header came crashing off the crossbar when he was well placed to score. This was  a big chance lost in the dying embers of the game and must have choked the Town bench and supporters.

Newcastle fans where beginning to celebrate a cup victory prematurely when in the dying seconds of the match a long free kick found Stephen Tierney who guided his header into the net beyond Baker to the Towns delight. This was a certain game-changer and the cup would now be decided on penalties.

Newcastle made a switch in goal for the shootout replacing Baker with Pearse McCarthy,  a strange decision but if it worked it would be a managerial masterclass with a hint of Louis Van Gaal in that World Cup shootout against Costa Rica.

The penalty shootout was a dramatic affair with Rory Burns making himself a hero saving two penalties from Declan Allister and Neil Corr as Castlewellan were crowned Harry Clarke champions on Easter Monday in a match that was so close that only the thickness of a scorecard could separate the winners and losers.