<![CDATA[ <p style="text-align: justify;">* Congratulations to the Down Ladies Footballers on winning the Ulster Intermediate title on Sunday of last week especially to all the Castlewellan Ladies on the team; Lisa Morgan, Orla Boyle, Cara Cunningham, Karen McMullan and Kyla Trainor. They all played their part in this fantastic victory. Well done ladies, you deserve this success – no championship titles come easy and after a few knock backs in the last few years for Down Ladies this is a much savoured victory. 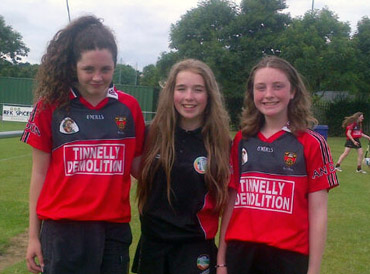 The Under-14 Camogs who represented Down at a Camogie Blitz last Saturday at the Naomh Mearnog Club in Dublin.[/caption]

* We’re into the final week of rehearsals for the final Mrs Brown’s Boys comedy extravaganza. Tickets still available for both shows in Walkers Newsagents but they’re getting scarce for Sat night. The cast are remaining very tight-lipped about the theme of the final play but one thing is for sure – it’s not to be missed. We do, however, have plenty of updates on the latest antics of the cast. There will be frantic efforts to get the lines learned this week as three of the cast have been on holidays Betty – USA, Gavin- Donegal and Lorna – Spain. HT was in Ballycastle for the day also. Lorna had a worrying moment when the wee man went missing on holidays.

She said she only took her eyes off him for a minute and he was gone. Luckily after a brief search Barney was found safe and sound wandering aimlessly in the direction of an alternative beach (I wonder what that means!). Moira caused outrage by gate-crashing the Dublin premiere of Mrs Brown the Movie waltzing up the red carpet claiming to be a VIP. She was last seen going into Lillie’s Bordello’s with Brendan O’Carroll. There were the usual spotting’s of cast members in various precarious positions round the Town recently under the direction of Spielberg King. He has taken his production company to Mexico to put the finishing touches on the hugely popular “movie scene” in the play. The offering this time is believed to be the best yet. Cillian has been in rehab for 6 weeks in time to get sober…..sorry able bodied for the play after a hunting accident. He was run over by a rhinoceros in Maginn’s.

HT is rumoured to have fallen out with Director Ciaran Milligan after insisting he goes into full character by appearing fully nude in one of the scenes. It was HT insisting on the nudity and Ciaran trying to talk him out of it. Rory McCabe and Kevin Sweeney have been attending elocution lessens this past two months to perfect their delivery. In the end Rory was told to wear a tighter pair of Y Fronts and Kevin was told he’s been living in the town for 25years! In an interview with Viz magazine Ciaran Milligan has said that this is by far the best of the three plays and has a different set up altogether. There are also more jokes, surprises, and jaw dropping moments that will have your sides splitting. There are also a few celebrity cameos that will also enhance the experience. Make sure you don’t miss one of the highlights of the year this Friday 18th & Saturday 19th July. Tickets £10.

* The Under 12 Camogs travelled to Clonduff on Thursday evening. The girls played well considering we were down players showing some great skill and ability. Well done girls your coaches were proud of you all. The Under 8/Under 10 Camogs have a blitz this Saturday (19th) in Kilcoo, would all those players in that age group meet at the club at 10.15am on Saturday morning.

* The Castlewellan Cul camp will run from Monday July 21st to Friday July 25th. The costs are as follows; 1st child attending – £36, 2nd child attending – £31 with all additional Children – £28 each. Registration for Cul Camp in Castlewellan takes place this Friday night from 7.00pm to 8.00pm and this Saturday from 12.00pm to 1.00pm. There are 2 specific camps the 1st being the Nursery Camp (for children going into Primary 2 & Primary 3 this September) & Full Camp (Primary 4 to Year 9). You can also register for the Full Camp online via www.gaa.ie/kelloggsculcamps. The cost is £36 for 1st child-£31 for 2nd-£28 for 3rd/4th etc from same family.

* A Castlewellan GAC contingent consisting of Sorcha McCartan, Emma Croskery and Amy Barr played for Down Under 14 Camogs in Naomh Mearnog, Dublin last Saturday. The girls made it to the final of the Shield only to be beaten by a very strong Dublin A-Team. It is good to see such a strong representation from the Club involved with the County. Well done ladies!

* Tuesday night saw the Under 14 Ladies travel to local rivals Bryansford. This was the second time a lot of these girls faced their neighbours following Under-16 game on Monday night. The young ladies warmed up and listened tentatively to a firing-up team talk before throw-in. The Town girls opened the scoring with a point, which was the commencement for a fast paced and determined display of football from both sides. This game was end to end – literally. At half time Bryansford were in front by 5 points. Again, the girls listened at half time to their coaches and out they went again. Within minutes they were level once again. Each team fought hard to ensure that they kept a hold of the ball, but this was a battle as the Ford fought equally as hard. Each score was responded with another score. As the game drew to a close Bryansford scored a goal. This goal, took the girls by surprise and the game finished up 4-7 to 3-5. You feel disappointment in a loss and the girls were certainly annoyed with the defeat. It hurt! For this game the girls should feel nothing but pride, they played their hearts out. Well done girls! We name them all as they worked hard as a team and are all deserving of a mention: Niamh Ward, Emma Croskery, Erainn McVeigh, Aislinn Hawkins, Alannah Megoran, Sorcha McCartan, Aine Hawkins, Aoise Nic Ruairi, Megan O’Boyle, Louise Doran, Amy Barr, Orla Morgan, Nadine McAleenan and Eimear Rice.

* There will be another order for club gear which will be sent to O’Neill’s in September 2014. There is a stock of club socks and shorts held in the club at present. Please contact Brian O’Neill if you wish to make an order for gear other that what is held in The Club.

* Sport NI are running a number of coaching courses in UUJ in the evenings from Sept 1st to 4th. If anyone is interested in attending please contact John O’Neill on 07711737610.

* There will be no coaching from Under 6 to Under10 from Saturday  July 12th to Saturday 26 July inclusive. Coaching will resume on Saturday 02 August 2014. Parents should make sure to complete registration forms for their children if they haven’t already done so.

* The summer juvenile coaching programme is now available on our website at:

* Finally something different! The two Martin’s (Keown & McClean!) joined An Riocht’s Cycle to Cooley Saturday week ago which supported The Southern Area Hospice. It was a great spin and the weather holding out certainly made it a day to remember. It was a well organised event and our two young (eh erm!) men thoroughly enjoyed the Sportive. Thanks to An Riocht for their hospitality and the great event they organised.