<![CDATA[ <p style="text-align: justify;">FOLLOWING a busy weekend last week, Portaferry RNLI has once again got the weekend off to a start responding to two emergency calls from distressed boaters.

On Friday 30 August, the first call was received at 2.55pm from two men and a child who were aboard a five-metre Shetland open top angling vessel which had lost power and run onto rocks near the entrance to Ardglass Harbour in County Down. 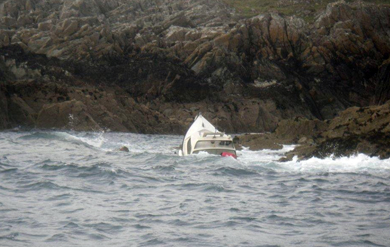 An angling boats sinks off the rocks south of Ardglass but the boat occupants  scrambled  onto land safely.[/caption]

The volunteer crew were on the water by 3.05pm and arrived on the scene 15 minutes later at 3.20pm. The weather at the time was cloudy with good visibility and force four north west winds.

When the lifeboat crew arrived at the scene, the two men and the child had managed to climb onto the rocks to safety where they were met by a member of the Coastguard.

The fishing vessel had lost power and by the time the crew could attempt to start the auxiliary engine the boat was washed onto the rocks.

The lifeboat crew could do nothing to salvage the quickly sinking boat and remained at the scene until the two men and the child had been taken to safety.

The second call of the day was received at 9.00pm from a man and a teenager aboard a 27-foot yacht which had lost engine power and was adrift close to the Fairway Buoy at the entrance to Strangford Lough, County Down.

The volunteer crew launched at 9.07pm and were with the stricken yacht at 9.55pm after conducting a short search in near darkness. The weather last night was fair with Force 4-5 with a north-west wind.

The lifeboat crew attached a line to the yacht and then proceeded to tow it nearly five miles to the safety of Portaferry Marina where they arrived at 11.20pm.

The yacht was then securely moored in the marina and the two people on board safely put ashore. Brian Bailie, volunteer Lifeboat Operations Manager at Portaferry RNLI, said; ‘It was certainly a busy start to the weekend for our volunteer crews and thankfully everyone was returned home safely.

“The skipper of the yacht which lost power at the mouth of Strangford Lough exercised good judgement calling for assistance when he did rather than attempting to sail back in what can be extremely tricky waters.”