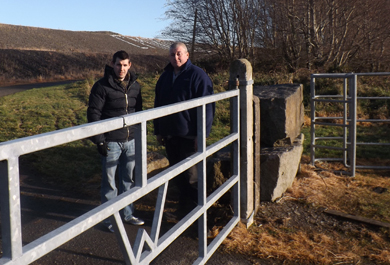 SINN Féin Councillor Stephen Burns has welcomed work carried out by NI water to an entrance of Lough Island Reavey in Kilcoo. The Down District  Councillor said he contacted NI Water following complaints from local people.

“I have been contacted by Kilcoo residents who said that young people in the area were using the bank of the Lough, a popular spot for walkers, to ride quad bikes on. The entrance where these quads were being brought through, beside Kilcoo GAC, was simply inadequate. “Since my representation, NIW have replaced the boulders at the entrance with larger ones, and the fence has been repaired and enlarged also. I’d like to thank NIW in their cooperation on this matter which I hope has now been resolved.”]]>