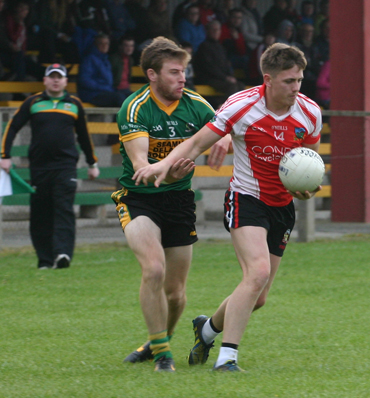 Michael Ireland tackles Aaron Somers during an early season confrontation between the Ford and Longstone. [/caption]

On a night with perfect conditions for a game, Bryansford proved to be just that little bit too strong for a valiant Longstone team that battled right to the final whistle. Inspired by a Ryan Kelly goal scored within thirty seconds the visitors sought to impose their game on the Ford writes Michael McCartan.

The free running Ryan Mc Dowell was superb, causing endless problems for the home defense and it was he who set up Kelly for the goal. Several fouls perpetrated on Mc Dowell over the course of the sixty minutes realised a further four points for the visitors.

Bryansford however were not going to be rolled over. By the end of the first quarter they had sneaked into a four point lead; the highlight a goal from Conor Maginn who found himself with only keeper John-Paul Haughian to beat, thanks to some very poor marking.

A brief rally by the Stone and the deficit was reduced to the minimum with Michael Ireland featuring prominently but lack of concentration was to prove costly as the Ford notched up a goal and three points inside the final three minutes of the half. Bryansford 2.08 Longstone 1.04 made happy reading to the home support at the break

Following the restart the homeside piled on the misery adding 1.06 as the visitors slumped into a period disarray.

It was Ireland’s point, the first after gap of twenty-two minutes, that seemed to settle his team. Although Stephen Mc Kibben cancelled this with a point of his own it was to be the Ford’s final score of the game.

With the game drawing to a close Bryansford were guilty of taking their foot of the pedal, which vexed the management. This resulted in five unanswered points inside the final four minutes but it was too little too late and Bryansford achieved their fourth win of the season.