<![CDATA[Strictly Update: Tickets are available to buy for both semi finals on Sunday 14 April in the Social Club between 6.30- 8.30pm. Limited tickets are available so come early!! Bryansford U-14 girls started their new league campaign with a victory over St John’s Bosco on Sunday. Under blustery conditions Bryansford started the game playing with the wind and led 8-0 at half time. Bryansford continued were they left off in the first half and with a combination of solid defensive play, high intense work rate throughout the midfield and excellent movement within the forward line lead to a 1-9 to 1-1 victory for the Ford. [caption id="attachment_37789" align="alignleft" width="390"]<a href="http://www.downnews.co.uk/wp-content/uploads/2013/04/Bryansford-GAC-_4.jpg"> 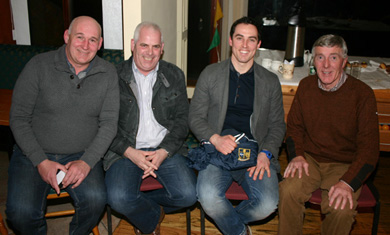 Francis McKinbbin, Brendan Fitzpatrick, Aaron Kernan and Tommy Walsh at the U-21 awards night.[/caption] The Seconds beat Saval while the thirds were defeated by Teconnaught – the juvenile fixtures seen Clonduff defeat the minors, the U-16 team beat Saval and the U-12 boys lost to Loughinisland. This Sunday sees the Senior team commence their season at home to Ballyholland at 4.30pm – note the time change. The seconds play away to Castlewellan – watch the website for details of time. The thirds are entertaining Liatroim on Sunday evening at 6pm The U-21 boys received their Ulster medals on Saturday Night with Aaron Kernan guest of honour. The other guests on the night included Down Chairman Seamus Walsh, East Down Chairman Sean McCashin with Secretary Ger Connery. Aaron stressed to the lads to push on with their success and ensure they didn’t have any regrets in years to come – he also lets us know about the Crossmaglen attitude and success throughout the past 13 years. Sean McCashin congratulated the club on their wonderful victory and told of how proud he was to be invited along to the presentation to speak to Ulster Champions. Peter McGrath and Benny Corrigan both thanked the boys for their efforts and also highlighted the spiritual training session in Kilbroney followed by breakfast and a morale boosting visit to the Monks Mass in Rostrevor as the turning point in the boys year – lads expect more of the same in the coming weeks! Underage commenced training on Saturday morning at 10am with groups for P1 – P2 P3-P4 and P5-P6. The P5-P6 group was poorly attended and they are scheduled to play a blitz this Saturday but this will depend on numbers – Parents are urged to contact Ronan McVeigh 07500 932464 for more information before Friday for details. Girls U-12 and U-14 training on Thursday night at 6pm. Lotto – 5,10,15,26 and bonus 18 – jackpot £6400 – Kevin Durkin had us sweating on Sunday Night!!!!!!!!!!!]]>