<![CDATA[ <p style="text-align: justify;">Showing during the St Patrick’s Festival on Saturday 15 March promoted by the Down Arts Centre in the Dowshire Great Hall in Downpatrick, local theatre goers are getting a chance to see a classic Brian Friel play that is seldom performed. 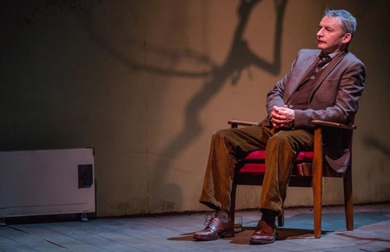 Brian Friel’s ‘Molly Sweeney’ written in 1992 is an interesting and  challenging play for theatre audiences and is recognised as one of his masterpieces. Friel has achieved many international honours in art and is Ireland’s greatest living playwright.

He had himself experienced eye trouble around the period he wrote Molly Sweeney in the early 1990’s, having to attend hospital in Letterkenny in his native Donegal. He was certainly influenced openly by Irish playwright Singe but Friel takes us to another place where we in the audience struggle deliberately with the visual delivery of the  action in order to explain what Molly was experiencing, a dependence on a world of words to perceive her surroundings. (It was Molly’s father who in her childhood described everything to her such as a flower, and she therefore understood her world through this process.)

There is no doubt that Friel was experimenting once again with the delivery of a complex subject touching on our basic perceptions, emotions and relationships. In the recent powerfully delivered Lyric performance of Philadeplphia, Here I Come, we are treated to he device of Public and Private Gar, and Friel further explores this world of psychodynamic psychology in Molly Sweeney. 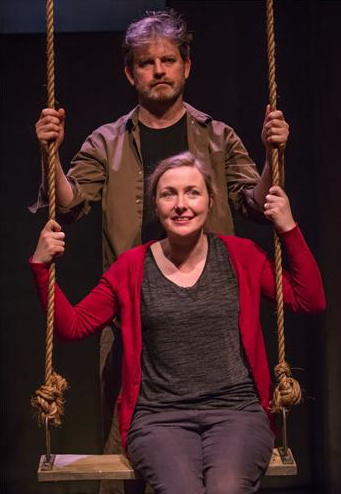 The 41-year old Molly (played by Dorothy Duffy), blind virtually from birth, has her sight restored by Mr Rice, an eye surgeon, but what follows is simply tragic. The three lives of the characters veer off in different directions. But the drama on stage is very much a psychological process. The three characters hardly move around the stage – Mr Rice (Frankie McCafferty) is stage right, Molly centre up-stage and Frank (Ruairi Conaghan), her husband, stage left. But what is it that Friel has created in this play  in the method of the play itself that turns it into one of his quiet masterpieces? The players adhere to these physical spaces, their psychological walls as if it were.

The peformances at the Lyric was word perfect and well delivered, all the more significant given the prodigious dialogue each performer carries.

Basically, Friel is inviting the audience to suspend its visual sense of actors performing mobilely around the stage to a a device where the individual monologues reflect the inner conscious and unconscious worlds of the characters in a reflective way. Gradually the characters unfold and the audience gets to understand them as individuals  and their  relationships to each other.

Molly’s husband Frank appears connected to Molly but not at a deep emotional level… she is more of a project in his life. And Mr Rice saw the act of restoring her sight as a means to breathing life into his ailing career. But Mr Rice in one brief scene did show a moment of close affection and attraction to Molly but that seeems to have been professionally ‘repressed’. Both men have in a sense objectified Molly, and perhaps Friel is making an existentialist statement here about the core of their relationships. I could not feel any genuine, subjective and sustained love from either Frank nor Mr Rice to Molly.

There is much play on perception, the ‘end games’, using touch, smell, and sound, while the visual world is a thing apart.  Signe Beckman’s set certainly works well with a chair on one side, a tree with a swing in the centre and a box on the other side against the outside gable end of a house. But there it becomes more intriguing when the windows are actually scenes of the outside environment adding a perceptual twist to the play. The players are ‘outside’, yet are looking out towards an external environment through the windows. The set I see as a mind, where we are trapped in our own subjectivity. 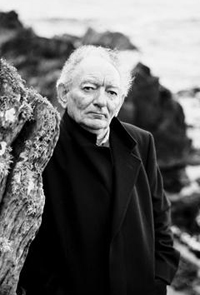 I found Friel’s exploration of Molly a fascinating process moving from the bouyant child-like character to one more philosophical in her post-operation stage confined to a psychiatric care ward when her mind cannot cope with the overload of worldly perceptions flooding her mind. Molly lives in a world of her own familiarity and declines in the post-operation stage into a self-imposed exile to the psychiatric ward. It is interesting too that in Philadelphia, Gar was torn between conscious and unconscious feelings and thoughts in a play of exile and emigration. But Molly, as the action closes, is resigned peacefully to her fate, an internal exile or withdrawal from the world.

Friel has used the Freudian concepts of ‘self ‘ in a  clever way, showing that the human consciousness can experience problems eminating from the unconscious mind which Mr Rice actually refers to. In Molly’s case, her overload of visual information following the operation arose following her operation caused a ‘flooding’ and her mind regressed to her experiencing the world through her non-visual senses. Her ‘agnosis’ was in fact the tragic decline into her own inner world which she seems to be accepting. As this happens, Mr Rice decouples emotionally form Molly, her use to him having expired. And her husband Frank too leaves for foreign lands on another self-centred exploit.

The symbolism of the lough as a reservoir, (the consciousness), a happy place where Rice spends his time pleasurably fishing, becomes a place he must separate from (again an exile theme). Being filled by the two smaller loughs, the main lough again appears as a psychodynamic process of Molly’s unconscious mind being loaded by worldly perceptions. It is in the later stages of the play that we feel that Mr Rice senses he has failed Molly who withdraws into her own inner world.

Molly Sweeney is a masterful play, cleverly constructed and brilliantly delivered by the cast. The recent Lyric Theatre run  has been well supported by appreciative, enthusiastic audiences.