<![CDATA[ <p style="text-align: justify;">THE Lyric Theatre’s production Brendan at the Chelsea has been gathering critical acclaim in New York and, as the show enters the last two weeks of the run, looks set to play to thousands of theatre-goers in the city. 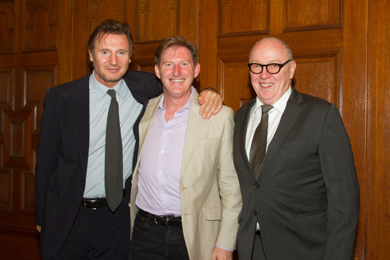 Adrian Dunbar who directs the show as well as starring as the notorious Irish writer Brendan Behan, has been the focus of much critical acclaim, and was described as “mesmerizing” and “remarkable” while the influential Huffington Post drew attention to his “terrific cast”. Janet Behan, Brendan’s niece, who wrote the play is praised too for delivering “a thoughtful, revelatory – and, ultimately, celebratory – peek into an extraordinary life.”

New Yorkers have reveled in the play’s portrayal of the city. The leading Broadway website nytheatre.com ended its review noting “Brendan at the Chelsea is as much an ode to a New York that once was as it is to a complicated man”.

It is fitting that this witty drama should do a run off-Broadway as the play is set in the legendary New York bohemian hub, The Chelsea Hotel where a hung-over, destitute Behan stayed in the 1960s.

The play then comes home to Belfast for a limited run on the Danske Bank Stage at the Lyric at the end of October, before touring to Dublin and Londonderry.

Adrian Dunbar said: “It has always been our ambition to take Brendan at the Chelsea to New York – it’s natural home in many ways. After our sell-out run at the Lyric we suggested that it would be a fitting way to thank all our patrons in New York and re-ignite the Lyric touring tradition if Brendan were to return there, and here we are! Thank you Lyric and all our funders.”

Brendan at the Chelsea returns home to the Lyric Theatre, Belfast from 30 Oct to 10 Nov. The show then tours to the Project Arts Centre in Dublin from 12 to 16 November and finally performs at the Millennium Forum, Derry 19 & 20 November. For more information on the Lyric’s season or to book, go to www.lyrictheatre.co.uk or contact the Box Office on (028) 9038 1081.