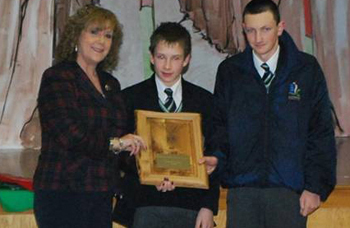 The plaque is to be given to pupils in the school who engage in charitable activities, community initiatives etc. It has been awarded this year to Jamie Hamilton and Aaron Cooper who completed the Aspire channel swim at the end of 2013.

The College was very fortunate last year to receive a plaque from Downpatrick Lions Club. The  two Blackwater pupils swam over 400 miles each last year, helping to raise £500 for Aspire, a heath charity – that was the equivalent of swimming the English channel two times and a bit more.

The College felt there could be no more worthy recipients of the first Downpatrick Lions plaque than Jamie Hamilton and Aaron Cooper for their huge effort, including helping with the bun sales.

Check this earlier link for the full story of their achievement: