<![CDATA[ <p style="text-align: justify;">Down Arts Centre is delighted to be staging the acclaimed production, Man in the Moon, for one night only on Saturday 19 October at 8pm. This new bitter-sweet comedy from Northern Ireland’s well-known screen writer, playwright and director Pearse Elliott has received rave reviews from the Belfast Telegraph, Irish News and Irish Theatre Magazine to name but a few. 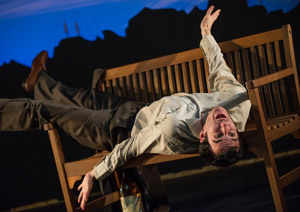 Ciaran Nolan performing in his one man show in the Down Arts centre on Saturday 19 October.[/caption]

This story of survival, centres on Sean Doran who is facing a number of challenges in his life. The play is set at the Half Moon Lake, a natural lagoon in the middle of Lenadoon Housing Estate in west Belfast, which although beautiful, is known as a place of tragedy.

The situation Sean finds himself in is one that many people in Britain and Ireland have to contend with today. He has recently been fired from his job and has had his house repossessed. To make matters worse, his girlfriend has left him and taken their child. Over the course of one moonlit evening, we join Sean on a comical soul searching journey looking back through his childhood and teenage years. Sean takes us on a ghost hunt of some of the funny people he has known and hilarious situations he has experienced in his life, whilst trying to fashion sense out of his recent run of bad luck.

Speaking about Ciaran’s performance, writer Pearse Elliott commented:  “Ciaran is one of the best young actors in Ireland today and this part has been written for him. This is my first one-man show and I am thrilled with the audience and critic responses. He has taken his natural comedic timing and partnered it with a bitter-sweet performance that has blown people away.”

‘Man in the Moon’ is produced and directed by Brassneck Theatre Company, whose recent smash-hit show, ‘The Sweety Bottle’ was a sell-out success at DAC and across the province in April this year. Arguably best known for one-woman show, ‘A Night with George’, Brassneck are pushing their creative boundaries with this new play, which although comedic in many senses, also deals with deeply serious and relevant subject matters. To quote Director Tony Devlin, “Man in the Moon is a story of survival, choices and how we can make a difference in this world.”

Also, a date for your diary: Fans of comedian William Caulfield will be excited to learn that he will be performing his brand new stand-up comedy show at DAC on Friday 18 October at 8pm.

The complete Down Arts Centre Season Programme is available to download at www.downartscentre.com