<![CDATA[ <p style="text-align: justify;">It’s one of the most eagerly anticipated highlights of any festival on the island of Ireland. And it’s just about to get even more exciting! The World Oyster Eating Championship at the 21st Hillsborough Oyster Festival – returning bigger and better than ever, between September 3rd and 8th – will see some major international hitters coming up against local champion, County Down’s Colin Shirlow.

Known as the ‘UK’s Oyster King’, Colin, who has won the championship eight times, holds the Guinness World Record for knocking back a whopping 233 oysters in just three minutes. 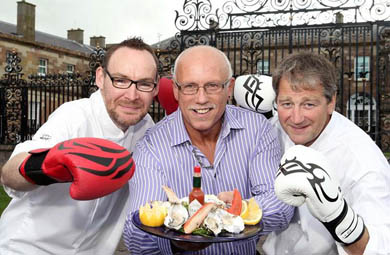 The larger than life Bob Shoudt, known to his legion of fans as Notorious B.O.B., holds a raft of world records in competitive eating, including devouring 39 Krystal hamburgers in two minutes and 34.75 beef brisket sandwiches in ten minutes. The competitive eater that is ranked 5th in the world by IFOCE (International Federation of Competitive Eating) is determined to make this an event that is talked about for years to come. The Pennsylvania man hopes that he doesn’t “cause an international incident by defeating the Great One.”

Notorious B.O.B. has tangled many times with another legend of the competitive eating circuit who is also mounting a challenge to Colin Shirlow, Matt ‘Megatoad’ Stonie, from San Jose, California. This challenger, who is ranked 4th in the world, holds many records and these include eating 31 Slugburgers in ten minutes and 5.5lb (2.45 kilos) of birthday cake in just under nine minutes.  Delighted to be competing in “an incredible festival and very prestigious contest”, Matt says his year-round training for many different US contests means he is in top shape physically for the big challenge.

Over 12,000 pints of Guinness, 4,000 glasses of Champagne and 6,000 oysters will be enjoyed at what has become one of Europe’s leading food festivals.

Significantly expanded this year, the Gourmet Food Market on Saturday September 7th will be brimming with fantastic local seafood and great Northern Irish produce. There will also be cookery demonstrations by leading chefs such as Niall McKenna, Danny Millar, Derek Patterson and Andy Rae as the Festival continues to put Northern Irish produce on the map.

But fabulous food and drink is only part of the story. This year’s schedule features a range of scintillating events to delight families, foodies, film buffs, fashionistas and fun-lovers alike.

A bumper entertainment schedule includes a crazy cabaret cinema event. The Festival’s ‘Nite at the Flicks’ featuring the Rocky Horror Picture Show, with optional fancy dress as well as a complimentary cocktail to get the party started! As well as the iridescent ‘Diamonds & Pearls Fashion Show’ and a special concert featuring the inimitable Flash Harry.

All the popular family favourites make a return to the festival bill this year including the Multi-Cultural Procession and Wacky Soapbox Race.  Sporting highlights include the Super Car Sunday, Oysters Masters Golf and a Charity Cycle Ride.

The red carpet will be rolled out for a night of unforgettable Hollywood style and glamour on Friday, September 6th when one of the most eagerly awaited events on the Northern Ireland social calendar, the Festival Banquet and Gala Ball, is themed around ‘A Night at the Oscars’.

Festival-goers can take pride in the knowledge they are also supporting The Jill Todd Trust working in partnership with Friends of the Cancer Centre.

For a complete guide to the Hillsborough International Oyster Festival 2013, including online ticket purchases, visit: