<![CDATA[ <p style="text-align: justify;">NI Water and the Northern Ireland Independent Retail Association (NIIRTA) are working together to encourage businesses in the County Down area to ‘Beat the Freeze’ should another severe winter occur this year.

And forecasters are already predicting a worse winter that we experienced in 2010/11. They say that later in November the winds will chill further and snow will set in with a big freeze for possibly three months creating possible gridlock across the country. 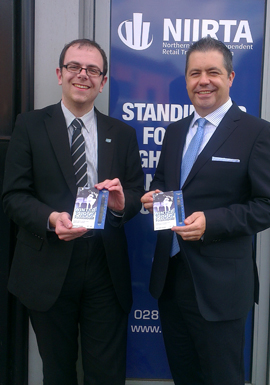 Following on from the successful ‘Two Step Pipe Check’ campaign of 2012, the new message reinforces the call to check that homes and businesses are prepared for the cold weather conditions.

Glyn Roberts, Chief Executive of the Northern Ireland Independent Retail Trade Association (NIIRTA), said: ‘‘Independent retailers suffered badly during the major freeze thaw of 2010/11, and while winters since then have been relatively mild, there is no guarantee that this winter will not see a return to those severe conditions, with an attendant economic impact.

“NIIRTA is very happy to support this campaign, and would encourage businesses to take steps to ‘Beat the Freeze’ and protect internal water pipes and fittings now to minimise the possibility of disrupted trade later on.’’

The advertising campaign will be rolled out through various media outlets including TV, radio, print and billboards. An information leaflet will also be distributed to households in Northern Ireland.

NI Water has produced a handy stop valve tag to encourage customers to locate their valve in the event of a burst pipe. Customers can obtain a free tag and other promotional items, including room temperature cards and ice scrappers by phoning our Waterline number 08457440088, emailing or contacting us through Facebook or Twitter. We also have a Customer Care Register which is designed to meet the needs of those requiring extra help or support from the organisation.

Joining is simple, customers can phone the Waterline number or obtain further information by visiting our website www.niwater.com

In January 2011 a single burst pipe in a vacant business property lost over 30 million litres of water.

This was enough to: