<![CDATA[ <p style="text-align: justify;">THE chairman of the Down Community Health Committee , Mr Eamonn McGrady, has called for the community to support the new campaign to restore the full 24-hour A&E cover for the Downe Hospital. 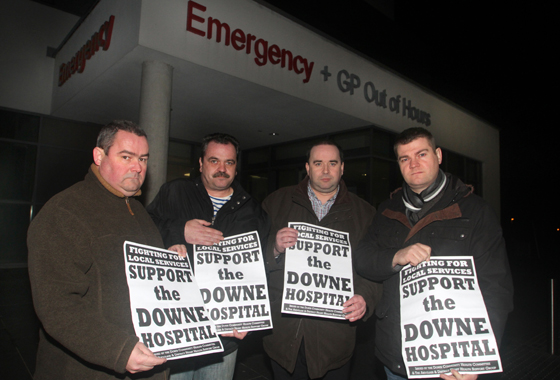 Mr McGrady said on referring to the launch of the Down Community Health Committee’s Facebbook page: “Each and every ‘Like’ makes a difference.

“We must retain the 24-hour accident and emergency service at the Downe Hospital.

“The Downe Hospital 24-hour A and E Facebook page was created by the Down Community Health Committee as one element of the campaign to fight the Christmas-time decision by the South Eastern HSC Trust to reduce provision in Down District, a decision taken, apparently, without any prior consultation with the local community and it’s elected representatives.

“Within 48 hours of the creation of the page, it had received over 2500 ‘Likes’ or messages of support. To date the total ‘Likes have risen to approximately 4500 and it is still growing.”

“The view of this community is being unambiguously conveyed,” said the DCHC Chairperson who added: “MLA’s are the key people now as healthcare is a devolved matter.

“The continued support of our local MLA’s who are undoubtedly highly influential in Stormont, will, I confidently believe, lead to a successful outcome for this campaign.

“In my view, the decision to curtail local services still further, even temporarily, was a very wrong one and will have to be reversed.

“I call on the South Eastern HSC Trust, which is responsible for the Downe Hospital, to issue a weekly update of the measures being taken and their success, in seeking to recruit the middle grade doctors required to restore the full provision on a permanent basis at the people’s Hospital,” added Mr McGrady.