The spectators who turned up at Millbridge last Saturday were treated to a rip roaring Border Cup tie that was worth every penny of the £2 admission charge writes Gilbert Cromie. 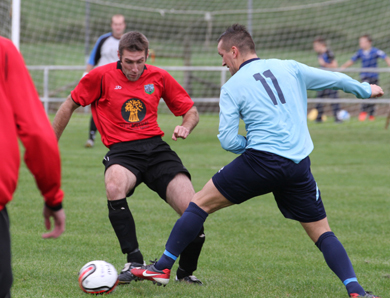 Ballynahinch half back David Boal blocks a run by Dunmurry winger Terry Kirkpatrick.[/caption]

It was Premier League Amateur League side Dunmurry Rec who made most of the running in the early stages with United restricted to breakaways. Their best chances in the first half were shots from Lee Maxwell and Gavin Crawford which went narrowly wide.

The visitors took the lead after around half an hour when a long throw glanced of the head of defender Paul King and fell into the path of their centre forward for him to fire home despite the efforts of Brian McMullan.

The second half started much the same as the first and it looked as if United’s day was over when Dunmurry took a 2-0 lead early in the second half.

United got back into the game when a Johnny Gibson left wing cross fell to Lee Maxwell and he shot home from close range. This gave United a lift and very soon after they were level when Ian Boal shot home from the penalty spot after Ian McMullan was fouled.

At this stage Dunmurry were somewhat shell shocked and United should have been 3-2 up when an Ian McMullan header was ruled out after he had collided with the keeper following a great through ball from Aaron Cheever’s.

United were on the ascendency and they did go ahead when following a pass from David Kelly substitute Stuart McMullan cut into the penalty area and his right foot shot took a deflection into the net to give United a 3-2 lead.

Dunmurry dug in and enjoyed a further spell of possession during which they equalised. 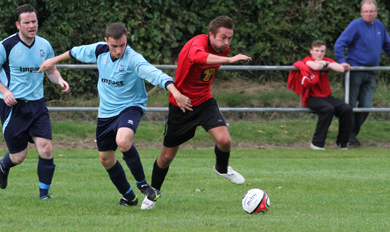 Teenager Greg Allison was introduced to the game and his strong running gave the Dunmurry defence a difficult time.

The game was now in its finals moments when a throw in from King found Ian McMullan and he ghosted past the visitors defence to shoot home and give United a 4-3 lead with the game in injury time.

The clock was now ticking and although time was up the referee added some more on for United’s goal celebration and as Dunmurry pressed to get back into the game a goal mouth melee developed and Dunmurry forward stabbed the ball into the net for an equaliser.

There followed extra time however the more experienced Dunmurry side scored twice in the first period and United just could not find an answer.

Although the game ended in defeat for United manager Keith Hamilton, he will be happy with the performance and battling qualities of his side that were missing a large number of players. Absent on holiday were Bingham, Brashaw, Hayes and Jackson while Herron, Smyth and Stevenson are on the injury list.

Into the side came Ethan Majury for the first time in over a year and he had a very steady game as did Paul King in defence alongside the reliable Davy Boal and JJ Carlisle.