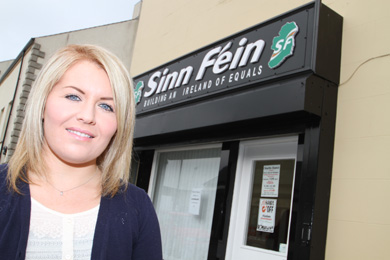 The Irish Street premises sits in the middle of an area planned for road development which will eventually help alleviate congestion in the town. The PSNI Estates teams had previously blocked access to the site on security grounds, holding up progress on the proposed Link Road from Irish Street to St. Patrick’s Avenue.

Downpatrick Councillor Naomi Bailie has secured access for Roads officials and believes work on this site should now begin in earnest. She said: “I welcome the decision by PSNI officials to grant access to the site. Roads Service have a number of surveys to carry out on this key site so that the outcomes can be factored into proposals for the development of a link road,” she said.

“This decision is timely given the imminent publication of the towns traffic survey, which I understand is due for publication in January. I would hope that surveys at the Irish Street site can be completed with urgency and factored into this document.

“This site may not be presented as the main solution to ease traffic in the town, but it will undoubtedly play a role in whatever the out-workings of the traffic survey are.

“I have informed senior officials from Transport NI this week of the change in circumstance and they are now in the process of arranging access to carry out the necessary work,” added Councillor Bailie.

The proposal is to link Irish Street through to St Patrick’s Avenue and create a one way system which would ease the traffic flow in Downpatrick town centre.