Dr John Callow will discuss James Connolly, one of the Easter Rising  key figures in Hilltown on Saturday following the publication of his book “Phoenix Rising: James Connolly & the Re-conquest of Ireland“.

This talk will be of great interest to students of Irish history.
The figure of James Connolly towers over Irish socialist theory and action. Dr John Callow in his talk will explore Connolly’s life and the development of his ideas during the writing of the ‘The Re-conquest of Ireland’ as well as celebrate Ireland’s working class history. 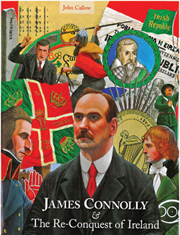 Events in the lead up to 1916, which included defeat during the Great Dublin Lockout and the outbreak of the First World War, will set the background to Connolly’s attempts to grapple with major questions of economic and political democracy, nationhood, national liberation as well as the rights of women.
This is an non-party political event which will be of interest to historians and trade unionists.
Saturday 12 March, 5.00pm sharp,  Clonduff GAA Clubrooms, Hilltown.
Everyone is welcome to attend and admission is free. Signed copies of the book will be on sale on the night – price £12.99.