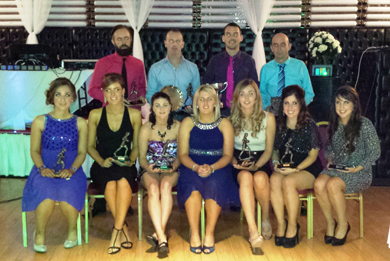 Following on from the Ladies presentations Paddy ‘Mo’ was invited to present the Senior Men awards. Patrick McClean, Managers’ Player ; Donagh Steele, Players’ Player ; Alvin Lynch, Sportsperson. Paddy also presented the Club Person of the Year award to Patsy McComiskey who shared the accolade jointly with Joan King. Joan unfortunately was unable to attend and will officially receive her award at the Juvenile Presentations. Both Patsy and Joan have done great work with the U-8’s & U-10’s and also their efforts at committee and sub-committee level assisting with fundraising and organising the kids trip to Sheepsbridge Bowling.

With it being the 10th Anniversary of the re-formation of the senior men’s team current and former players renewed acquaintances and with the rest of the club patrons & guests viewed powerpoints of a Review of the Season past and a trip down memory lane. The Ladies players also treated everyone with a superb ‘Rory’s Stories’ send up of the outgoing Ladies management team. The short video was very well received by the lads. Wayne, Ruairi and Colum were thanked for their efforts with presentations made on behalf of the ladies playing squad.

Thanks to the everyone who attended the event and helped in any way in the organisation of it. Go raibh míle maith agaibh.

The Juvenile Awards Presentation Night will be held in the newly re-furbished Aughlisnafin Community Hall on Friday 28th November. More details in the weeks ahead.

The Annual Club Mass will be held in Aughlisnafin on Thursday 20 November.

The AGM will be held on Sunday 30 November at 3 pm. This is an exciting time for the club, both on and off the field, and members are encouraged to attend the AGM to reflect on the past year and to help shape and plan the future of Aughlisnafin GAC. We would particularly encourage the parents/guardians of our juvenile players to come along to view at first hand the massive progress the club has made to date and to lend a helping hand no matter how big or small.

Winter coaching programme for U-6’s has been postponed to Saturday 22nd November in the Fin Hall due to coaches being on a course.

The club invite expressions of interest for the post of senior team manager/management. Email should be sent to secretary.aughlisnafin.down@gaa.ie

with name and contact details no later than Sunday 23 November.