<![CDATA[ <p style="text-align: justify;">The inaugural Fin Fun Mud Run on Saturday was a massive success and thanks goes to the organising committee, those club members who helped out and to all those who sponsored and or participated in the event writes Gerard Lenaghan.

The feedback on the club’s event facebook page has been of overwhelming praise from many and really makes all the hard work worthwhile. We will be back again ! Watch this space !

On the football front the Seniors grabbed their first win of the season at home to Killyleagh. Despite the involvement of many of the players in the club’s major fundraising event the opposition were unable to facilitate a postponement. It is a credit to the lads that they showed grit and determination to combat the fatigue and dig out the win. With Niall Lennon recovering from a hand injury, Ror Murphy (flu) and Christian Keown unavailable the return of Sean Willoughby and Chris Doran to the starting 15 was timely. 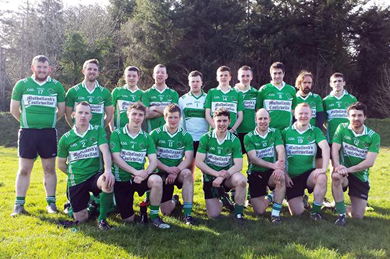 The Wolfe Tones had wind advantage in the first half but it was the Fin who led at the interval 1-5 to 1-2. Shane Mooney getting the major with points from Ciaran Rice (0-2), James Brannigan (0-2) and Sean Willoughby. Paul Flanagan was lost to a questionable black card with James Marmion replacing him after only 10 minutes of play.

In the second half Killyleagh pointed first but a third point of the game for Rice and another from Breannain McComiskey put the Fin four points ahead. Killyleagh grabbed a second goal and a point to draw level. Rice sent over his fourth of the game to edge the Fin ahead again. Killyleagh were awarded a penalty and missed a great opportunity to gain a massive advantage with the shot cannoning back of the upright. A let off for the Fin and McComiskey grabbed a second point to put the Fin two clear. The visitors hit back to make it a one point game but the Fin had enough left in the tank to see out a battling win. Great performance with Patrick McClean the pick of the defence and Shane Mooney the star forward on show. James Brannigan also having a great game in midfield sending over two great scores from distance.

Final score Aughlisnafin 1-9 Killyleagh 2-5. Next game is away to Magheralin to play St Michaels next Sunday at 2 pm.

The Ladies played a challenge game against Bright on Saturday evening after many were involved in a long day on Mud Run duty and while the result went against them it was an opportunity for the players to get game time before the season starts next month.

The U14 boys played out a very competitive U14.5 challenge game against South Down Division 2 team Annaclone. The visitors looked lively in the opening period and led by 3 points before Oran Flanagan found the net for the Fin. Moments later Eoin Lundy stroked home a penalty after Cathal Murphy was impeded in the square. Annaclone replied with a point before it was negated by a superb point from Cathal Murphy. Faelan Murphy followed up with the Fin’s third major of the game. Another point came from the impressive Ruairi Quinn as the Fin played some neat football. Towards the end of the half Annclone grabbed two goals in quick succession to leave it all square at the short whistle. Aughlisnafin 3-2 Annaclone 2-5.

adjacent pitch. The Fin grew in ascendancy as the half wore on with superb defending by Callum Haynes, Jamie Allen, Jack Matthews, Adam Lenaghan and Lewis Casement restricting the visitors to only a further 0-4. Eoin Lundy added 2-1 to his first half tally with Oran Flanagan tagging on 0-3 to give the homsters a six point win. Good displays too from Ruari King, Dara Burns, Conor Matthews and Aaran Flanagan in the forward line.

Best wishes to Shea Croskery who is still recovering from a broken arm and we hope to see you back on the field soon.

The U12’s also played their Annaclone counterparts at the same time as the U’14’s and every player got game time. The U’12’s first grading game will be Sunday 6 April.

Seniors and Ladies training schedules as per their respective Facebook pages.