The Fin opened their account with a reversal against pre-tournament favourites and eventual cup winners An Riocht. In the second game the ‘Fin met the eventual Shield winners St John’s B team with both sides playing out a thrilling draw. The ‘Fin did not have much luck in their next three games falling to Dromara, Carrickcruppen and Castlewellan respectively writes Gerard Lenaghan. 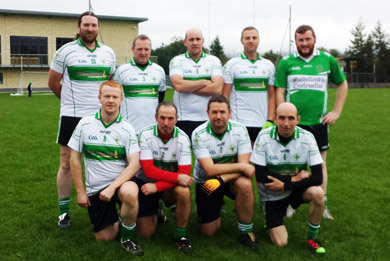 Having played five games in a row they got a ‘bye’ before playing in their last game against St John’s ‘A’ and secured a superb one point win to finish second from bottom in the table. Paul Quinn getting the winning point. This meant the ‘Fin had to play bottom placed St John’s ‘B’ for a place in the Shield final against third from bottom Dromara.

A much improved St John’s display saw them win and go on to beat Dromara in the final. It was a great days craic and after 70 minutes of football there were some sore legs on Sunday. We now look forward to the final tournament of the season in Dromara on Saturday 26 October.

A selected U-14’s panel will attend the second East Down blitz to be held under lights at the Red High in Downpatrick this Friday evening. The first game starts at 7 pm and so all players should be at the venue at 6.30 pm.

The U-10.5’s will play Bryansford in a challenge game this Saturday, time to be confirmed by text. This will wrap up the season for this group of players.

Active Start Coaching for the U6’s re-commenced a fortnight ago and is held in the Fin Hall every Saturday morning at 10.00 am. The sessions are geared towards coaching the ABC’s (Ability, Balance, Co-Ordination) and the RJK’s (Running, Jumping, Kicking) in the first stages of Long Term Player Development (LTPD) for playing gaelic games.

There will be training sessions every Wednesday at 6.30 pm in the Fin Hall for all those in Year 13 down to Year 9. Players should bring their own water bottle.

Due to lack of interest the club will not now be running a bus to Croke Park for the second Rules test. Those interested in attending can get tickets by going online at:

There was no winner in the 49 Club this week. The bonus ball was 35.