<![CDATA[ <p style="text-align: justify;">A stunned Clifford Healy spoke to Down News about the burning down of his pigeon loft in Killyleagh.

He has been racing and breeding pigeons for over thirty years and is one of the area’s top experts. On Saturday around 8.30-9pm, he was alerted that his pigeon loft was ablaze while he was on the phone to his son, David Healy, former Northern Ireland soccer star who lives in England.

Clifford Healy, a member of Killyleagh Central pigeon club, rushed up to the area where the pigeon lofts were located and saw his loft with twenty breeding pigeons well ablaze. Neigbours appeared with fire extinguishers but the blaze was too far gone. 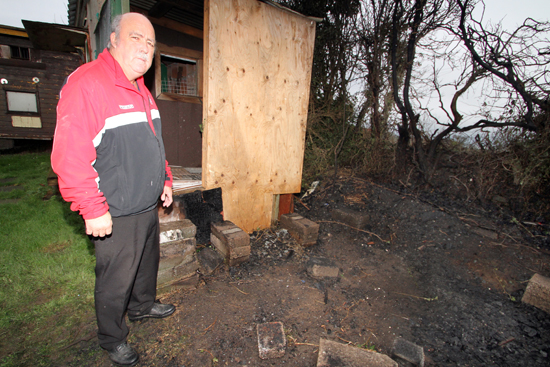 Clifford Healy from Killyleagh looks over the charred remains of his pigeon loft destroyed in an arson attack.[/caption]

“It was just devastating. I can’t understand why anyone would want to do anything lie this. Just what is the point of it all?” asked Clifford.

“I’ve been inundated with offers of help fromn as far away as Belfast and Newtownards offering me pigeon sheds, new birds and other items to get me going. However, I won’t be deterred. I will have a lift back up in a few days again and will build up my breeding stock again.  I lost some excellent breeding pigeons in the fire.

“This fire could have spread to my other two lofts adjacent had the wind been blowing in the wrong direction.

“I’m just appalled at this. It is just so senseless. I’ve been involved for pigeons for many years and have won over 200 races at local and international level. This incident has just left the whole pigeon community in Killyeagh and beyond shocked.

“Severeal years ago I had a break in and 18 pigeons were killed, and there was a fire about two years ago at a loft in Shrigley. But by and large we don’t experience much bother.”

One resident said: “It is just sickening. I picked up one injured bird that had managed to fly out of the fire. It was badly burned and obviously in pain. It died a short time later. This is just disgraceful.”

Rowallene Councillor Billy Walker expressed his anger at the recent arson attack in Killyleagh and said: “This once again is a deliberate act of  destroying property and it has to be condemned in the strongest way possible.

“We now need people to come forward and expose who these people are who have burned down Clifford Healy’s pigeon loft. These people need to be locked up. They need a custodial sentence by the courts.  We have seen to many fires in Killyleagh over recent years and sooner or later it could lead to the lose of life or injury.

“These people are just morons. I am utterly disgusted by their complete lack of regard to people’s property and public safety. I urge anyone who knows who these culprits are to contact the police.”

Also condemning the aroon attack, Strangford MP Jim Shannon MP said: “It would appear that flammable liquid was sprinkled over the shed and it was set alight in the full knowledge that it would kill the pigeons inside in a most horrific way. Clifford Healy is well known as the top pigeon fancier in the area and he has put his heart and soul into this sport and to have this taken away from him in such a way is really disturbing.

“It is abundantly clear that anyone who has any information at all should contact the PSNI immediately. This type of cruel behaviour can never be accepted and those who are guilty must be held accountable for their actions.”