The Council’s financial contribution will help the Hospice to redevelop facilities at Somerton House. 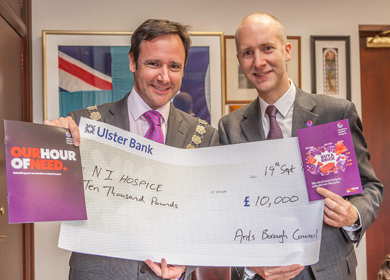 Councillor McIlveen commented: “NI Hospice cares for over 200 people and their families from the Ards Borough area each year and the Council’s contribution to the redevelopment fund will impact positively on our residents, as well as those form across Northern Ireland who use the valuable services and facilities provided by the NI Hospice. I look forward to seeing the plans for Somerton House develop”.

“This significant funding for Northern Ireland Hospice will help to build a legacy of hospice care and to make the vision for a new hospice a reality. We are very grateful to Ards Borough Council for generously supporting our campaign.”

Northern Ireland Hospice’s redevelopment plans include a new 18 bed inpatient unit, Day Hospice and an education and research centre on the existing site at Somerton Road. For further information about the plans and to show your support please visit www.nihospice.org or call 028 9078 1836.

November 24, 2020
We use cookies to ensure that we give you the best experience on our website. If you continue to use this site we will assume that you are happy with it.Ok