<![CDATA[ <p style="text-align: justify;">Would your dog bite? Are you insured? A recent case has illustrated how important it is to keep your dog under control, and if needs be, muzzled.

Ards and North Down Borough Council has reminded dog owners that it is their responsibility to keep their pet dogs under control.

The warning comes on the back of the Council’s successful prosecution of a case where a dog control condition stipulating that a dog must be muzzled in a public place was breached and the animal also attacked and injured another dog. The owner was ordered to pay out over £2,000 in fines and compensation. 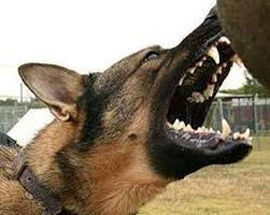 Ards and North Down Borough Council have warned dog owners to keep their pets under control at all times.[/caption]

The case was first heard at Ards Magistrates’ court on 16 October 2015. The dog owner was found guilty of both offences but subsequently appealed the case. It was reheard on Friday 6 November and the convictions were upheld.

The owner was fined £1,500 – £1000 in relation to the breach of a dog control condition stipulating that the dog must be muzzled in a public place, and £500 for attacking and injuring another dog. Damages of £100 towards vet fees were also awarded to the owner whose pet was injured, as was £450 in costs to the Council.

Commenting on the case, Mayor of Ards and North Down, Alderman Alan Graham, said: “It is important that dogs are kept under control in public areas such as parks and beaches so that everyone can enjoy the use of our outdoor spaces. This includes keeping dogs on leads in designated areas and ensuring that dogs with a history of aggressive behaviour are muzzled in public.

“The Council enforces these stipulations by issuing appropriate Dog Control Orders. Dog owners who breach these Orders face a fine of up to £1,000.

“The Council takes seriously and will investigate reported incidents where dogs are not kept under control. In cases where there is substantial evidence it will always prosecute.”

To report an incident where a dog was not under control in the Ards and North Down borough contact the Neighbourhood Environment Team on 0300 013 3333.