<![CDATA[ <p style="text-align: justify;">An Ardglass prawn trawler almost sank when it snagged a submarine a few miles from the County Down coast north of the fishing port.

Just after 4pm, slipper Paul Murphy of the Karen, a 60-foot wooden hulled trawler, was making his second tow for the day and conditions were quite calm. 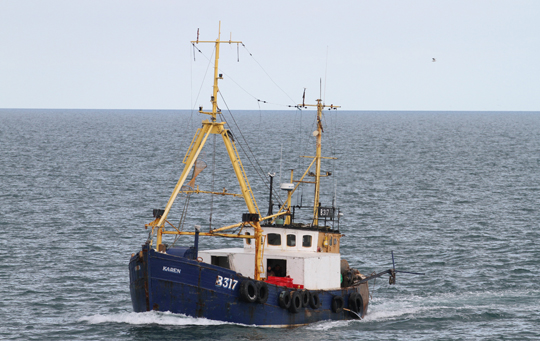 The Karen steams back to port in Ardglass lucky to be afloat after netting a submarine.[/caption]

Suddenly, the vessel lurched and was pulled backwards dramatically as the submarine moved on. Paul Murphy said: “Without warning, were were stopped and pulled backwards very violently at around ten knots which is the top speed of the vessel. I really thought that was it! 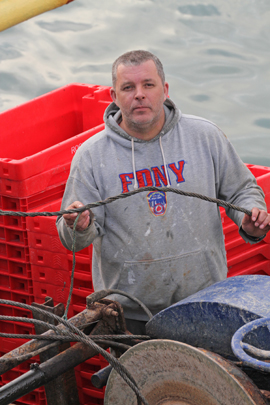 Karen skipper Paul Murphy examones the steels ropes that snapped when the submarine towed his vessel backwards at 10 knots.[/caption]

“We were towing at just a couple of knots. I was almost knocked off my feet with the force. It was fortunate that one of the steel ropes holding the net snapped or we would have been pulled under very quickly.

“One of the gallows which holds the wire rope mounted to the deck was severely bucked with the force. The crew were just in shock after this incident. It really was a close call. The incident only lasted about just over five seconds but it was very scary. The submarine did not come up to the surface after we tangled with it.

“We have now lost thousands of pounds of fishing gear because of this. It really should not have happened.”

Dick James, Northern ireland Fish Producers’ Organisation chief executive said: “We negotiated protocols with the Royal Navy around twenty years ago and it seems that they were not observed in this case.

“This raises the question about the national identity of the submarine. There is a NATO exercise taking place in the Irish Sea at the moment I understand and there is always the possibity that this was not in fact a NATO submarine.

“I will be contacting the naval base in the Clyde to find out more about this tomorrow morning and try and get some answers. When a submarine is involved in an incident, the protocols agreed indicate that they must immediately surface. In this case it did not happen and this also applies to Allied and NATO submarines too. It should at least have come up to periscope depth.”

Also at the harbour when the Karen arrived back in port was local Councillor Dermot Curran, who said: “These four fishermen were extremely lucky to have escaped this with their lives. It all seems to have happened so quickly. I believe a few weeks ago there was another incident in the Clyde estuary where a trawler netted a submarine and it also did not surface. 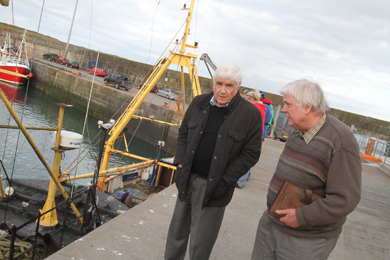 “This does raise the possibility of Russian submarines spying in the area. But I will ask our MP Margaret Ritchi to contact the Minister of Defense and seek an answer to this. It clearly should not be happening and if it is a Royal navy submarine or a NATO one then questions do need to be asked.

“The boat owner Simon Wills has lost fishing gear which amounts to a couple of thousand pounds and will now have to contact his insurance company who in turn will need to address the MOD and see if they will accept responsibility. It may be a long drawn out and difficult business.

“My heart goes out to the crew who really had a very frightening experience. I will do whatever I can to help with this. There could have been a loss of life and it is all deeply concerning. Fishing is a dangerous occupation and we do not need this additional level of danger.”

A spokesperson for the HM Coastguard said the incident was reported at 4.17pm today.

It All Adds Up On Numbers Day For The NSPCC