<![CDATA[ <p style="text-align: justify;">History has been made again in the Irish Close Championship. 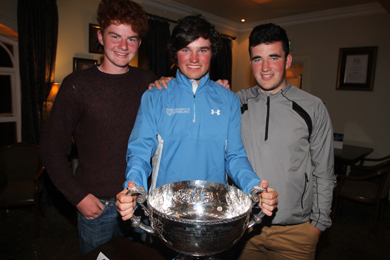 Cormac Sharvin (20) has only been playing golf five years and is now an Irish Champion after his win yesterday. He beat Greystones golfer Paul Dunne by a hole in the matchplay final shootout to clinch the coveted title. Now he will have his name engraved in the cup along with former amateurs Rory McIlroy, Padraig Harrington and other top players.

Showing nerves of steel, Sharvin had already won the Silver Medal having the lowest score as the leading qualifier in the biggest amateur golf event in Ireland sponsored by AIG giving him a tremendous boost as he eyed up his opposition in the final stages of the contest.

Even though he has only been playing golf for five years, Sharvin showed a maturity and strength of character that oozed confidence for his young years when he beat Greystone’s golfer David Byre in the semi-final play in the morning looking very much a player in control of his game. In his first amateur major final playing against Dunne,  he again showed this calm temperament that certainly impressed. 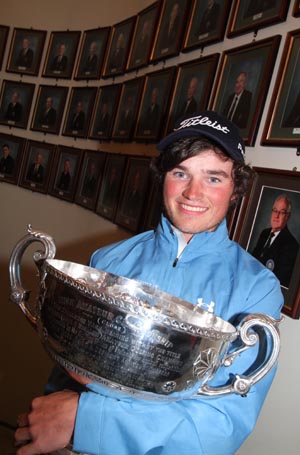 Adglass Golf Club manager Cormac Cahalane said: “Cormac is a great young player and a model for all young people in the game. He has a tremendous temperament and came into golf late. He is an example to all juvenile players in what he has achieved. It doesn’t get much better.

“He played brilliant golf to win the Irish Close Championship and the members of our club are just so proud of him. We wish him every success in the future in his golf and in his studies.”

Speaking to Down News on his arrival at Ardglass clubhouse on Wednesday evening, Cormac Sharvin said: “It was really weird. At the start of my matches, I don’t feel I am in a match. I just seem to relax into my game and don’t feel the pressure that much. I just enjoy the golf and in Connemara I just felt so calm. So after a couple of holes I just settled down into the game. I felt comfortable with my swing the whole way round.

”It really was a dream week for me to win the Irish Close Championship. I knew I had been really playing well in the build up to it and in the stroke play I was just hitting the ball awesome.”

Having lost the first hole to a par, Sharvin composed himself and won the next two holes to edge ahead. Then he won the eighth hole with a par, and the pair stood on the tenth tee just 95 minutes after starting in a display of how highly competitive golf can be played at a sensible pace.

“Next Monday I start in the British Amateur championships and that will be a tiring week but I am looking forward to it. I’ll certainly be there doing my best.”

Delighted with his incredible win, his golfing buddies John Feenan and Mark Cahir, both excellent golfers, knew he was on the verge of achieving this great win. John Feenan said: “I played with Cormac for the past couple of weeks and he had been shooting 64’s and was just hot.” Mark Cahir added: “Over a week ago I was on the course with Cormac and his game was fantastic.  All he had to do was ensure his putter was working and he was on a winner. It really is amazing how he got into the game of golf. Some summers ago he was heading out to fish off the rocks beside the golf course and ended up hitting a few balls and got the bug. He’s never looked back.” 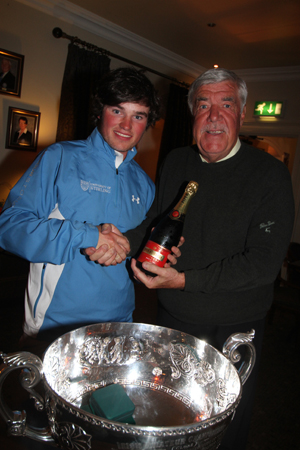 Sharvin is a first year Sports Studies undergraduate at the University of Stirling and he said: My game plan is to finish his studies and continue enjoying my golf and then look at whether I could turn pro…but that is way down the line in the future.”  The level-headed young man was definitely no rushing in to a highly competitive sporting environment.

In the matchplay final, Sharvin pressed Dunne even further, and a birdie two at the par three eleventh saw him take a three-hole lead. But a slack putt on the par three thirteenth after heavy rain came up ten-feet short.  Sharvin then missed his par putt and Dunne was squeezing back into the game. Dunne in the morning semi-final had been taken to an extra hole by Naas golfer Jonathan Yates.

Sharvin demonstrated his composure by making a stunning par on sixteen. Having been in thick rough, he hacked out to 75 yards short of the green, pitched to five feet and holed the putt to stay two holes in front despite Dunne’s excellent par.

The drama mounted in the closing stages as Sharvin missed a ten-footer on the seventeenth hole and Dunne birdied from a short putt.

Going down the last hole there was only one point on it and Dunne was showing he was preparing to go to resolutely the wire.

Both Sharvin and Dunne hit the rough and laid up. Dunne sent his second shot from 160 yards to 15 feet on the pin but steely-nerved Sharvin knew what he had to do and sent his ball to 10 feet on the pin. It was a tricky right-to-left putt down the hill, and unfashed by the pressure, Sharvin hit the back of the cup to win the championship.

“I’m speechless, absolutely speechless. It’s mad,” he grinned afterwards. “It was quite close too. On the seventeenth I hit the purest putt, I don’t know how it missed. I was just pumping going up the last, and I’m still shaking. It was just mental.” 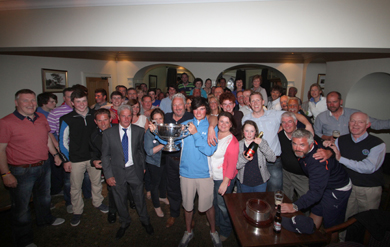 A welcome at Ardglass Golf Club for Cormac Sharvin as he returns with the Irish Close Championship Cup.[/caption]

Sharvin is now only the third Silver Medal winner to go on to win, following in the footsteps of Padraig Harrington (1995) and Garth McGimpsey (1988).

When he returned to Ardglass late on Wednesday evening, club members were there in force to congratulate him on his outstanding achievement which has lifted spirits in the Ardglass Golf Club to new heights.

This was a golfing victory  the club will remember for a long time to come when one of their members became the Irish amateur golfing champion.

Paul Vaughn, Ardglass Golf Club Pro, has taught and mentored Sharvin through the earlier part of his relatively short time in golf. He said: “I was involved in coaching and guiding Cormac pretty much from the word go when he took the game up. As he progressed as a natural he then attended the Darren Clarke Golf School at Greenmount and then when he went to Stirling university where a lot of his progress goes down to his university coach Dean Robertson. This was a great day for Cormac his family and Ardglass Golf Club.”

Today Ardglass Golf Club has a true and deserving champion in its midst.