A political partnership between Irish-speaking independent local Down District councillor Cadogan Enright and Unionist NI21 deputy leader John McCallister MLA has led to a successful conclusion to the campaign to overturn the refusal by the South Eastern Education and Library Board (SEELB) to allow Irish speaking children to use the ‘yellow bus network’ from villages around Lecale to  their primary school (‘bunscoil’) in Downpatrick.

The campaign was organised on behalf of parents in Ardglass and Killough by Independent Councillor Cadogan Enright and supported by NI21 MLA John McCallister. 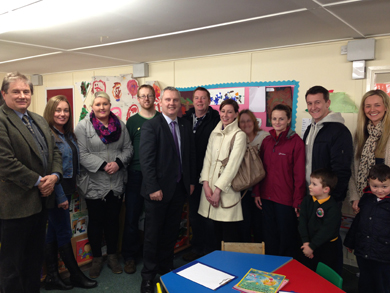 Cllr Cadogan Enright, left, with John McCallister MLA, fifth left, and supporters of the campaign at the Millfield Irish speaking playschool in Killough.[/caption]

At a celebratory meeting of parents at Killough’s Millfield park Naíoscoil (Irish speaking pre-school), Cllr  Enright praised the role played by MLA John McCallister, saying: “The last time I took a similar case for children in Ballyhornan and Downpatrick it took seven years and a High Court case to resolve the matter.

“Thanks to efficient pro-active and intelligent campaigning work by John McCallister and his Newcastle office staff we were able to win this case in a record four months. Time is of the essence to parents with 4 and 5 year old children who need a safe and reliable transport system today, and not years down the line”.

Naíoscoil leader Maggie McKendry said: “Great credit has to go to Councillor Enright for his organisation of this campaign, and especially to MLA John McCallister who sponsored two Ombudsman cases, mobilised the Children’s and Human Rights Commissioners and highlighted the case under the Race Relations Act. All this was done in an incredibly short space of time and it is a credit to them both.”

John McCallister commented: “It was clear to me from the outset that this was a simple matter of equality. Furthermore it is ‘best practice’ for schools to share facilities. Cllr Enright had confirmed with Downpatrick Primary that they had no issues with sharing transport with Downpatrick’s Bunscoil.

“As a Northern Irish Unionist I value our shared culture and heritage, and I am aware that it was fellow Presbyterians in Belfast who succeeded in preserving the Irish Language in Ulster 200 years ago, so we can still celebrate its usage today. The Irish language is for us all, not just one community.”

Cllr Enright agreed with John McCallister on the importance of the Irish language and thanked Downpatrick Primary School for their support and said: “This campaign demonstrates the excellent cross-community spirit that pervades this district, where people from different backgrounds and outlooks rally round for the benefit of all and defy those would have us at odds with each other. This is a victory for the whole community”.